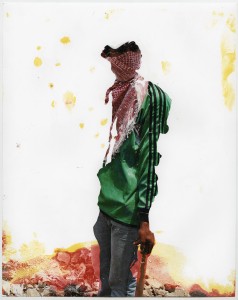 Devastation never looked so attractive as it does in Curtis Mann’s 14×6 grid of appropriated photos from the war zones of the Middle East. With bleach and washes as his weapons, Mann attacks his images, attenuating and coloring them brightly with a predominance of yellow so that they end up as elegant spidery abstractions that, only on close-up, reveal their subjects, which take on the appearance of twisted shrapnel floating in clouds of fine white smoke above heaps of ruins and sometimes a forlorn human figure, or below a sliver of pale-blue sky. One cannot imagine a more complete beautification of violence, although that is not to say that Mann glorifies war, but only that he has taken the tried-and-true photographic mission of redeeming the ruins to its maximum explosive limits or, perhaps, beyond them. Mann’s two triptychs and his single images are more representational, but the sensibility remains the same. (Michael Weinstein)

Through March 1 at the Museum of Contemporary Art, 220 E. Chicago Ave.