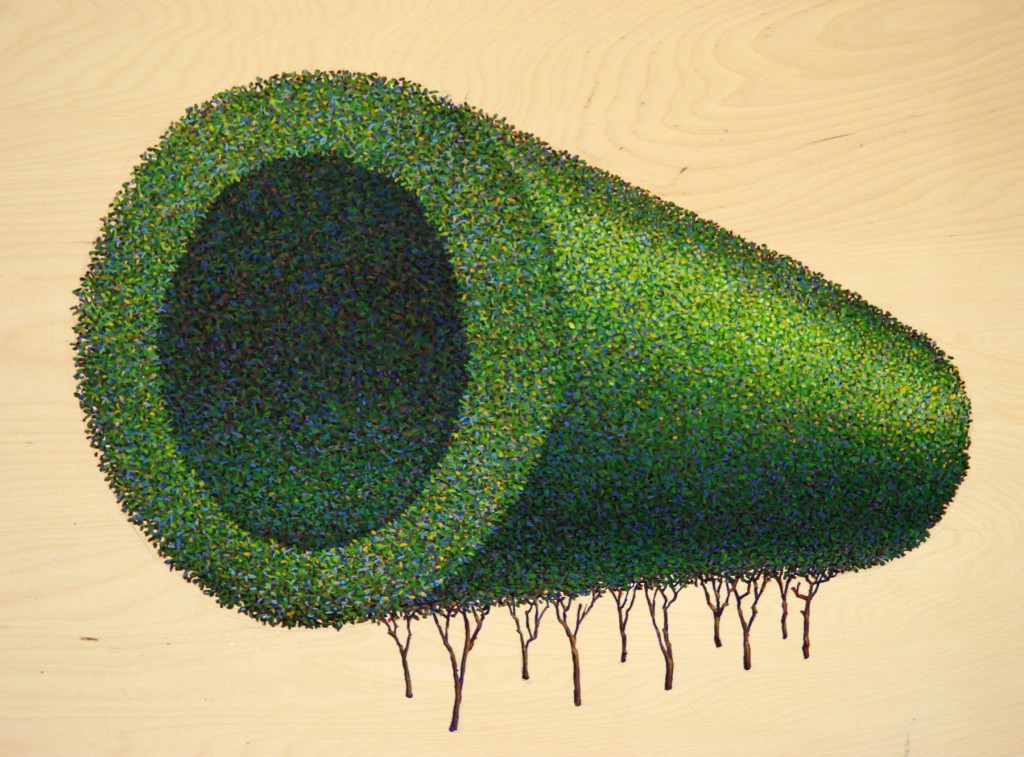 If cows, corn and cockapoos can be genetically modified to serve perceived human needs, why not trees, too? Think of the green possibilities if ordinary conifers could do double duty as international-style shelter, street signs and urban infrastructure, even playground equipment. The line between the utopian and the ridiculous is thus wittily crossed in David Lefkowitz’s clever and vaguely creepy new paintings, which depict topiary meticulously sculpted into various implausible forms: a freeway overpass, a slide and something less recognizable that resembles a partially groomed shrub fleeing the shears. Painted in oils on buttery-smooth birch-wood panels, the trees’ foliage is made up of countless miniscule brushstrokes, each leaf the size and shape of a grain of rice. The paintings’ digital aspects are twofold: when viewed up close the image pixelates, but at the same time Lefkowitz’s painstaking pointillism reminds us that it is made by human hands. These painted topiaries are as fastidiously constructed as the decorative shrubs they parody, an irony that’s clearly not lost on the artist.

Lefkowitz’s images are straightforwardly rendered, his delivery wry, as seen in a painting of a topiary cut like a palm tree. His use of birch as a substrate recalls his 2004 “Improvised Structure” paintings of elaborate, modernist-style cardboard dwellings executed on flattened cardboard boxes. Lefkowitz’s current works are more playful and living-room friendly than this earlier series. This softens their edge, but also enables them to nestle, burr-like, in today’s domestic environments, where candles are shaped like apples and artichokes and synthetic orchids thrive without attention. (Claudine Isé)