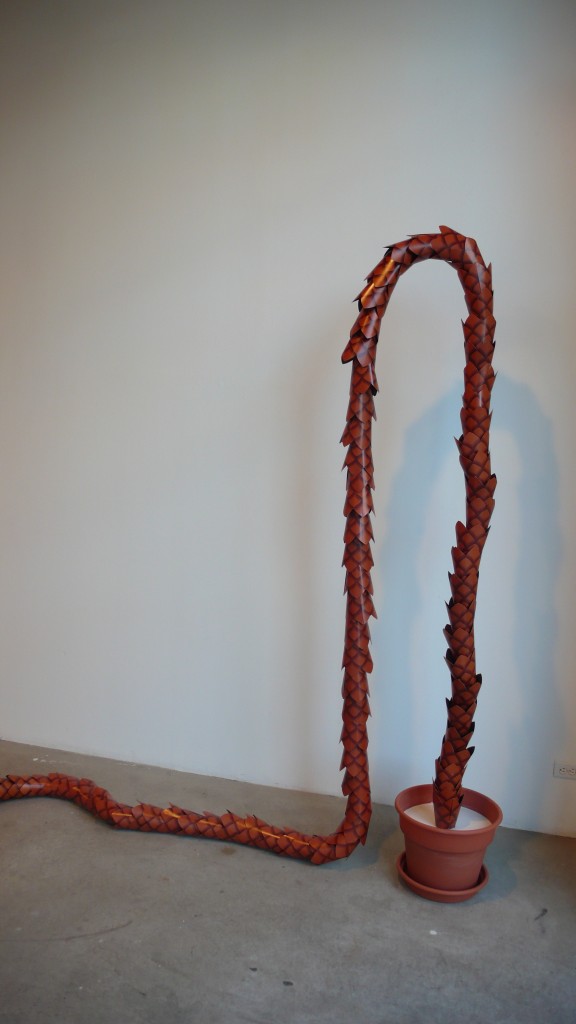 Justin Cooper’s varied (and usually collaborative) performances provide context for the objects in “Paranormaldise” at Monique Meloche. Several sculptures congregate in the main room while the back room houses a video titled “Studio Visit” surrounded by drawings. Shown sped up, the video captures the endeavors of a wild intruder in Cooper’s studio. The visitor attempts to draw a still life of oranges and apples, and when unsuccessful, proceeds to trash the studio in a fit of rage. The trope of the sped-up video illustrates Cooper’s performances, which tend toward the comedic, the libidinal and the chaotic. While the playful drawings are tenuously related to the video, they find their fullest expression in the sculptures.

In “First wet dream,” Cooper balances a wheelbarrow vertically by one handle atop a conch shell, a rare moment of perpetual stillness in the maelstrom of folding chairs atop loops of garden hose, or the large steel armatures of “Giant Leis” covered in plastic ruffles. Cooper’s sculptures oscillate between the residential aesthetics of the hardware store and the party store. For instance, a prefabricated paper palm tree titled “Exhausted” rises out of its pot only to droop quickly and lay flaccid on the ground. “Exhausted” is an image of the insufficiency of cheap entertainment made with disposable, single-use decorations. Cooper’s engaging work feels as seedy and discontented as an office party luau but suffers slightly from the absence of the enlivening presence of Cooper himself. (Dan Gunn)