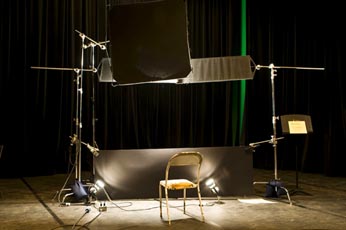 An overhead projector, familiar to anyone who attended high school between the years 1960 and 1990, sits in the center of artist Leigh-Ann Pahapill’s multimedia installation. Its presence signals the exhibit’s educational component—a bunch of ideas that cling to academic French philosophy made popular during the selfsame technological era as the over-head projector. While Pahapill’s art claims to explore the nature of meaning itself, her installation better succeeds at questioning how an arrangement of objects can possibly express a complex philosophy. Alongside the overhead projector are schematic diagrams or maps of theories—one can’t be sure since they aren’t labeled. Removed from whatever textbook they first appeared in, here the line drawings only serve to represent an idea, or Idea, without any specificity.

The French Deconstructionists—“Foucault, Derrida, Kristeva, whateva”—often played with the notion that ideas are, at heart, incomprehensible, and the deeper we launch into the mind’s capacity, the further we get from certainty. Formlessly following function, Pahapill piles on the incomprehensibility. On a set of video monitors, Pahapill shows a series of gesticulating hands, presumably people ‘talking with their hands.’ Disconnected from actual bodies, though, the gestures are rendered meaningless, but enjoyably strange, and ultimately turn the viewer deaf-and-dumb.

Geographers and explorers use the phrase ‘point of inaccessibility’ to mark the most difficult sites of access on a map (for example the spot in the ocean furthest from any land, or the most remote part of Antarctica)—no doubt a very attractive endeavor for some. In this installation, where the darkened gallery is punctuated by sparse artificial illumination, Pahapill locks the viewer in a constellation of points of inaccessibility, a trompe-l’oeil black hole without air, without footing, and forever receding. (Jason Foumberg)