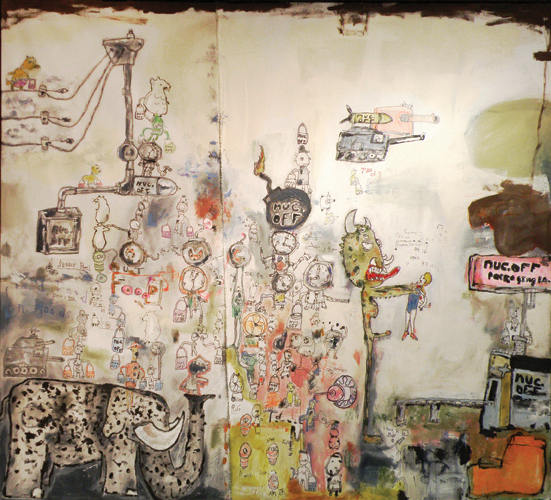 Self-taught and clearly influenced by Cy Twombly’s embodied mark-making and Jean-Michel Basquiat’s expressionistic graffiti scrawl, Von Kommanivanh’s artwork is experienced viscerally in staccato moments of almost whimsical violence. He is most successful in the largest paintings whose worked surfaces swarm with armies of cartoon-like figures wielding bloody scythes and nuclear warheads. Kommanivanh’s interest in cultural criticism and anti-war protest holds him back in some places—the more literal, the more he limits the strongest aspects of his work: its manic energy and unsettling juxtapositions. Kommanivanh is a Laos native and it’s hard not to wonder what he thinks of Brad Kahlhamer, the Native American artist whose paintings about identity and alienation Kommanivanh’s so strikingly resemble. The found-object flying-ship assemblages included in the current show provide its most straightforward pleasure. Standing amidst the hanging ammo shells, discarded utensils, fur, gears, feather, rope and metal scrap, it is easy to imagine oneself having stumbled into a mad general store run by an artist of terrifying imagination. (Rachel Furnari)