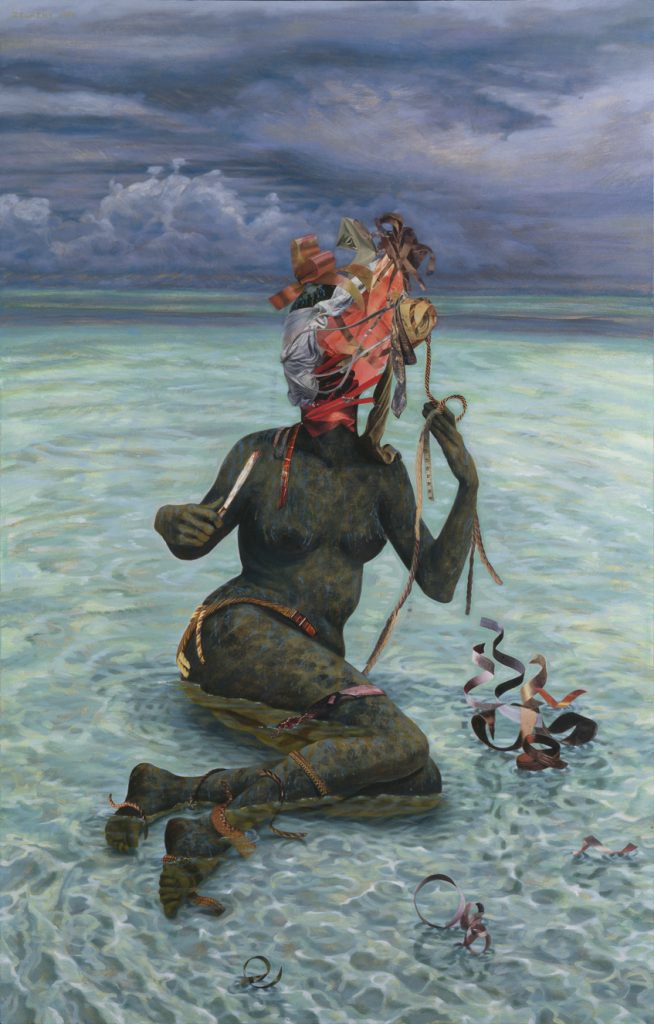 Mary Lou Zelazny relates an anecdote about the artist Pieter Bruegel, the great chronicler of sixteenth-century life in the Netherlands. Bruegel would often go into town and sketch characters from life, she says. He had to be quick about it, and sneaky. Disguised among the crowd in local dress, he could sketch a peasant woman’s candid weariness or a child’s uninhibited game.

Bruegel may not be the first art-historical reference that comes to mind when looking at Zelazny’s works, which combine a realistic painting technique with collages from popular magazines, but the sentiment about making art discreetly, and rejoicing in the profound oddities of everyday life, holds true. Zelazny is an artist who looks intently at things, but is also open to surprise. “It’s such a big world, and there is so much to see,” she says, as if this moment was her first step into the great big unknown. But it’s not. A retrospective of her paintings from the past twenty-eight years is now on view at the Hyde Park Art Center.

Zelazny is clearly enthralled by the heaps of stuff available to her as an artist. In the art world we call it “influence” or “appropriation” rather than “stealing,” and in her catalogue essay, curator Allison Peters Quinn makes clear the many, many allusions to past and contemporary artists cited in Zelazny’s works. As a viewer it’s a delight to pick up on these references because you know that Zelazny drops them there for you. It’s not inner-circle name-dropping, but it rather reminds me of author Annie Dillard’s reminiscence from her own childhood: she would plant shining pennies in a shrub’s shadow, and then draw arrows on the pavement directing passerby to a chance discovery of luck, but never waited around to witness the encounter; to imagine it was enough excitement. 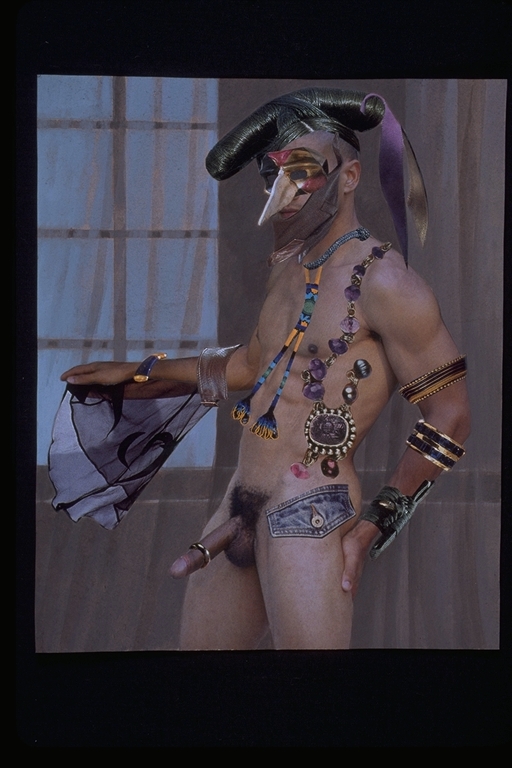 So too does Zelazny leave little gifts for the viewer to unwrap. She constructs figures and personages from magazine cutouts: product displays from consumer weeklies, recipe illustrations from modern woman monthlies, mechanical wonders from Scientific American, natural wonders for the armchair traveler. Most of the early collages feature faceless people, their features replaced by a thing. But this isn’t to say that Zelzany believes we’re the sum of our shopping expeditions, and she doesn’t moralize about the ceaseless stream of chatterbox media. Instead, an image of a woman’s face saturated by a flock of birds, or gold necklaces whirling eel-like, or an erect cock carefully draped with plaid fabric scraps, are like crisp little poetic stanzas unexpectedly plucked from a sink of dirty dishes. Combined, they create a scenic narrative: of love, of solitude, the tragic and the comic.

The appearance of so much stuff in Zelazny’s works, especially the things of modern life—telephones, car bumpers, the GE logo—are such that they’re records of the past fifty years. Even a close-up picture of cake can be dated to the 1950s-70s; it is simply one of those advertising tropes of middle-class domestic bliss. A trio of candy-colored pills balanced atop a Walkman is more explicit. Zelazny explains that the date-specific imagery comes from dumpster diving at a time when old ladies were tossing their stacks of magazines; it’s simply what was available. Of course, Zelazny does have a choice in the matter, and like Bruegel, she chooses to document a certain feeling, say, the way that we pass through our days, rather than depict specific people and events. (Although, Zelazny did turn to portraiture for a few years, but there she diminished the use of found images for collage.) 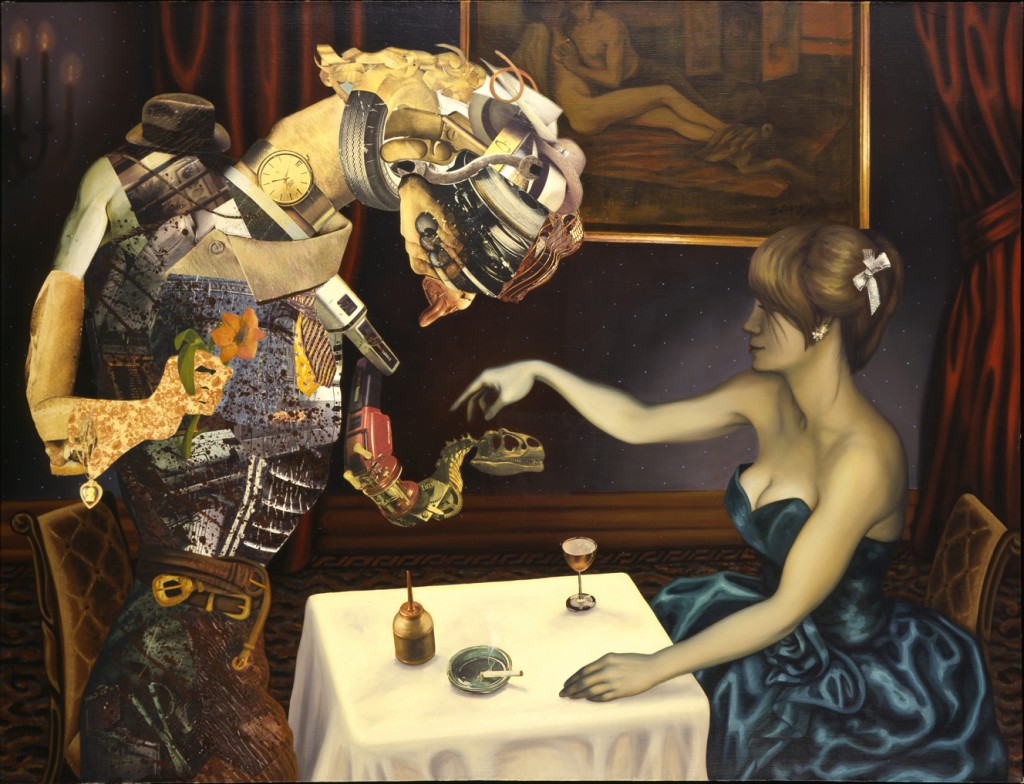 The game of art-historical allusions is informative, but it’s the Surrealists that provide a direct route to the heart of Zelazny’s work. Surrealism, birthed in Paris in the nineteen-teens, found a second home in Chicago. Collecting Surrealist art became de rigueur here. Troves of Surrealist art served as points of reference and beget second and third-wave Surrealists and, in part, the Chicago Imagists, many of whom set up at the School of the Art Institute. (And later, collectors donated their Surrealist collections to the Art Institute, thereby preserving the genre.) It’s here that Zelazny attended art school. Salvador Dalí’s “Mae West’s Face which May be Used as a Surrealist Apartment,” a collage-painting created in 1934-35, and accepted by the Art Institute in 1949, could pass for a work by Zelazny.

Surrealist artists might be typecast as dreamers who live in their heads, but historically they’ve been keen to the absurd intricacies of everyday life—a found love letter or shopping list, or a slip of the tongue. These are launch pads to revelation. “Ideas come from living life,” says Zelazny. It’s like the break you take from an intense period of work—only by stepping away, and looking around yourself, do you discover yourself.