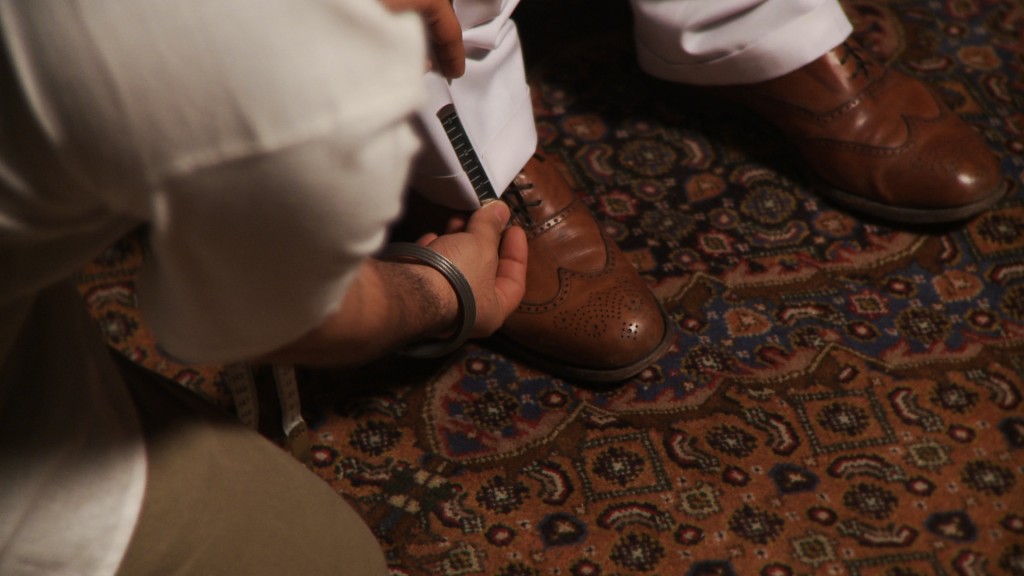 The year 1950 saw India signing into effect a new constitution, officially marking the nation as a republic free from British rule. One year later, Ealing Studios, England’s oldest film-production company, released the film “The Man in the White Suit,” a satire starring Alec Guinness as a befuddled, good-natured scientist whose invention of a glowing white fabric that cannot deteriorate or stain is meant as an altruistic gesture towards the common man. Yet, the material threatens to undo the entire textile industry and is instead met with hostility and alarm, particularly by labor unions.

India’s independence and the release of the film, two events (one historic and the other quite banal) at first seem mutually exclusive. Yet, for English artist Mathew Paul Jinks, who generations later now works and lives in Chicago, there is something of a post-colonial parable betwixt the two—particularly considering that India is today one of the greatest exporters of textiles, an industry employing millions and millions of people, and fraught with tricky, trans-national power relations.

For Jinks’ serene, thirteen-minute film project “The Queen’s Tailor,” on view now at Green Lantern Gallery, the artist has loosely cast himself as the Alec Guinness character getting a suit made by two Indian men—one man (Parveer Singh) is a Sikh in real life.

This is certainly not a literal reinterpretation of “The Man in the White Suit.” Instead told through a series of pensive, meditative vignettes that stream between physical and metaphysical moments, “The Queen’s Tailor” presents a very ordinary but complex set of questions for today’s global day and age: Does the production of this item (the white suit) participate within a colonialist structure? Or, has reconciliation somehow been reached, making this okay? Or, is it just overly PC to really worry about any of it?

Jinks doesn’t pretend to know the answer. “The piece considers what it means for this group of people, myself included, to pass through this ‘third space’ here in America, forming a strange kinship while together re-enacting a kind of colonialist relationship,” says Jinks, borrowing a term from theorist Homi K. Bhabha, excerpts from whose book “The Location of Culture” repeat throughout the film.

A subtle cross-cultural glimpse at the play between appearance, gentlemanliness, nation and custom is also at work in “The Queen’s Tailor,” particularly as we watch Jinks receive a haircut in the presence of Singh (the Sikh), whose turban covers hair kept long for religious reasons.

“The push and pull of these uncomfortable moments may be a bit naughty,” says Jinks, who frequently appears as a figure within his own work, “but it is through enacting these moments that perhaps a new kind of understanding can be formed.” (Danny Orendorff)

[…] February 27, 2009 You are cordially invited to the Green Lantern this Saturday, February 28th for a screening of THE QUEEN’S TAILOR and an artist talk with Matthew Jinks. At 2pm the screening will begin, with the artist talk starting at 3 pm. THE QUEEN’S TAILOR is a stunning film. You can read more about it in last week’s issue of NewCity, or by going to: https://art.newcity.com/2009/02/16/portrait-of-the-artist-matthew-paul-jinks/ […]