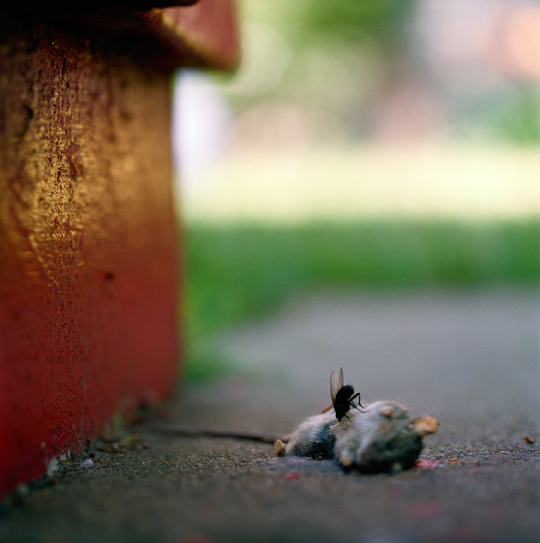 Live, dead, whole, mangled, stuffed and plastic, fauna are the subjects of Colleen Plumb’s decidedly less-than-cute color photos that comment on our ambivalent, widely variant and often neglectful or even downright sadistic relation to the animal kingdom at our urban doorsteps. Do not expect any of Plumb’s images to grace a greeting card or children’s book; a bloated black fly feasting on the remains of a carcass—probably a rat—in a crumbling alley is not the stuff that cheery uplift is made of. Far from trying to mobilize for the animal-rights movement or to offend sensibilities, Plumb’s intent is to subvert shallow romantic myths about all creatures great and small, and to jog viewers into getting real. She succeeds admirably in giving visitors the chance to open their eyes and minds to all the myriad ways in which we allow animals to enter our midst, and how we deal with them when they are inside the spaces that we arrogantly claim to dominate. Unfortunately, most people who pass through the show do not seem to get the point, responding to the sights with “Ugh!” and “Gross!” (Michael Weinstein)