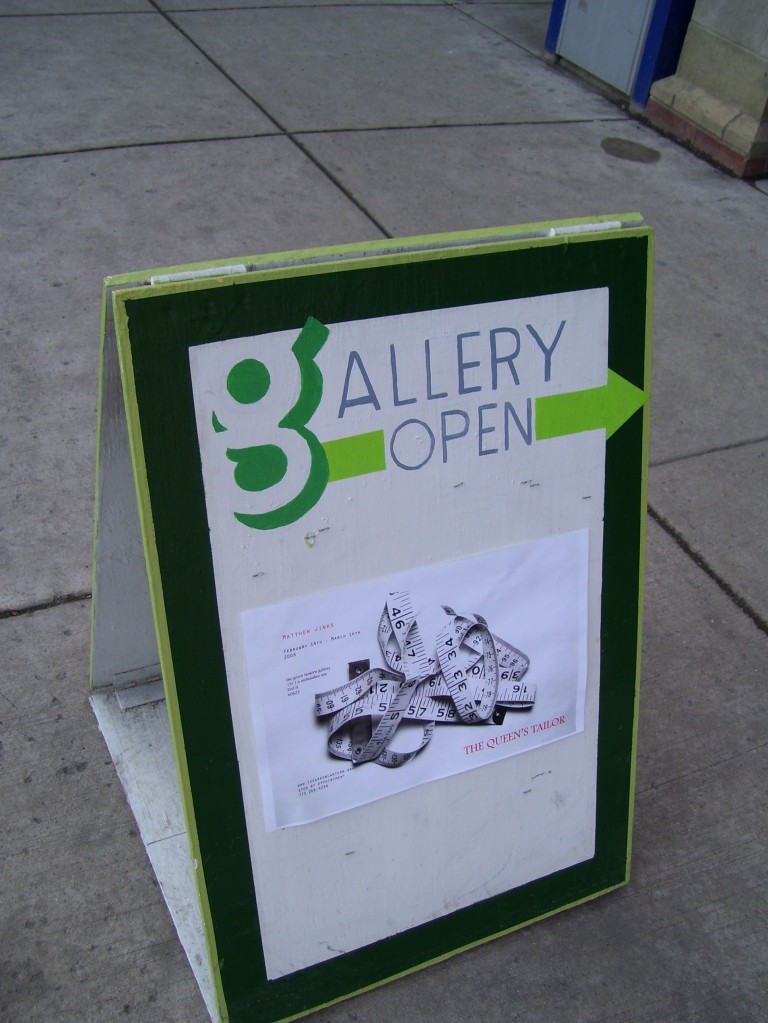 Green Lantern, a contemporary-art venue and small-edition publishing house, recently received an unexpected visitor from the city’s Department of Business Affairs and Licensing. Gallery director Caroline Picard was cited for displaying a sign without the proper permit. For years a sandwich board sign sat on the Milwaukee Avenue sidewalk, in Wicker Park, right outside the gallery’s entrance. Picard said the sign lured a good number of visitors to the space, which hosts exhibition openings, performances, readings and, until recently, held regular open hours. The standard hours can no longer be maintained since, after citing Picard for the sign, the city official inquired about the gallery’s business license. Green Lantern is established as a not-for-profit, but no license was ever acquired. Picard paid the $440 fine, which she ceded was fair since the space is partially commercially zoned, but attempts to resolve the license issue at city hall have proved complex and frustrating. This may be in part to Green Lantern’s mission as an alternative art space, which is difficult to properly classify. With its neighbors in the Flat Iron Arts Building, the Green Lantern is one of the last vestiges of a formerly robust arts district in Wicker Park. For now, events must be deemed “private,” but visitors can expect an attendant on hand to open the door during what used to be the open hours. Best to call first, though.

Would it be strange to encounter art listed NFS (not for sale) in a commercial gallery? This label is sometimes applied to an artwork that an artist simply cannot part with, but gallerist Rowley Kennerk instead uses NFS as a keen strategy. Currently his eponymous gallery is exhibiting two paintings from private collections alongside two paintings available for purchase. Kennerk’s strategy, which he employs often, pairs well-known artists with emerging artists, and the result seems more like a curated exhibition than a gallery show. Exhibiting well-known work by important artists establishes and maintains credibility, says Kennerk, for both the younger artists and the gallery itself. “The gallery is not simply a showroom of goods, but a space in which assertions about culture are made,” says Kennerk idealistically. Currently, a work by Llyn Foulkes, born in 1934, who’s had large retrospective exhibitions, and a painting by Enrico Baj, an Italian of Foulkes’ same generation, are hung with paintings by gallery artists Molly Zuckerman-Hartung and Malthias Dornfeld. The good company certainly lends a boost to their resumes, and the private collection loans round out a theme on contemporary portraiture.

Of course, cultural value and monetary value go hand in hand. Recently The Art Newspaper pointed a finger at the Rose Art Museum for lending a Willem de Kooning painting to a commercial venue, Haunch of Venison in New York. The museum’s director defended the loan with an editorial in a later issue, justifying the intellectual completeness of the gallery’s exhibition. Woefully, the museum’s board has since decided to sell the museum’s entire collection, a move that was not anticipated at the time of the loan, but sheds an indecorous light on the de Kooning, which now may or may not be inflated in value due to the excellent company it kept in the New York show.

The More the Merrier

If the art market is drowning, then perhaps now is the perfect time to trot out smaller, more affordable works. Prints and other small edition works can often pack as much punch as a major sculpture or painting. Several galleries in Chicago are taking advantage of collectors’ shrinking budgets for art and, with the influx of print lovers for the upcoming Southern Graphics Council conference, are putting on large shows of small works. Dan Devening released a new series of multiples, his third such collection. More than eighty editions are on view in “Max Multiple,” from editions of three to 100, ranging from $1 to $3,000. There are some gems here. New Catalogue prints pair famous Minimalist sculpture with designed objects such as the slinky and the parking cone. Adam Pendleton screenprints on mirrored steel. You can grab a bumper sticker conceived by Philip von Zweck for $5 (“Honk if you love silence”) or a poster for $1 by Jason Pickelman. There’s also some sculpture in the shape of functional objects, such as Cody Hudson’s vases and Im Schafer’s porcelain cups—at least that’s what they may be. For good measure Devening exhibits some works from his collection, including selections from the En/Of series, where an artist designs LP liner notes and album cover for a musician.

[…] NewCity wrote a little something about the business license situation, which is much appreciated. You can see what they wrote by going here. […]