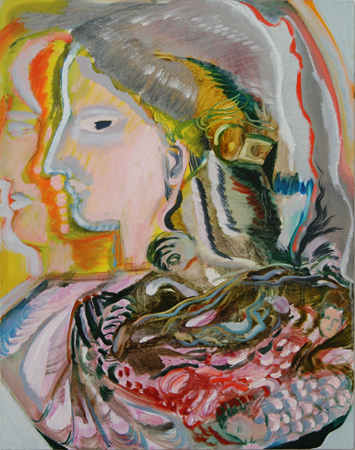 The word “grease” usually implies slippery, fatty substances, or underhanded dealings. In Allison Katz’s “You Talk Greasily,” the adverb seems to refer to the artist’s style of painting, in which thin layers of paint (oil, acrylic, and spray paint) are applied in a sloppy yet controlled manner. The strokes vary from painting to painting, some soft and muted, others aggressively jagged and harsh, as if Katz hesitates to commit to a single identifying style. If not for the recurring color palette, it would be difficult to classify the body of work as belonging to one artist. The style varies according to the subject—a detailed still-life is displayed next to a minimalist female profile, followed by a patterned abstract. (No single source of inspiration is cited; the show’s press release further puzzles viewers with quotes from Shakespeare, Robert Rauschenberg and poet Theodore Roethke, whose connection is not established.) The most arresting piece of the show is “Dancer,” oil and acrylic on canvas. A woman in a yellow jumpsuit (exuding an eighties-like vibe) stands in a contorted, abstracted environment, legs apart and arms raised in what might be a defensive gesture if the title didn’t suggest otherwise. Placed off-center, the figure’s unusual stance spans the height of the canvas, taking control of the piece. In Katz’s other pieces, the human figure is common but not dominant—when present it is suggested by silhouettes, outlines and profiles rather than fiercely and proudly displayed. (Patrice Connelly)

[…] Patrice Connelly points out in her New City review of the show, Katz employs so many varying stylistic devices it’s hard to tell that the work was made by a […]