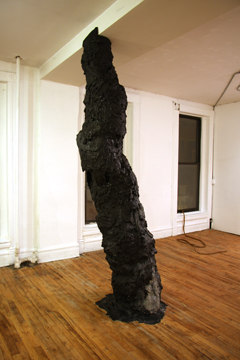 The ambiguous exhibition “Either Both/And or Neither/Nor” was created over the course of a week inside of Scott Projects. Paul Cowan and Scott Cowan, artists and brothers, usually keep their art practices separate but came together for this conversational collection. Less collaboration than call and response, each piece seems to have a double or a rebuttal elsewhere in the exhibition. In this way we don’t see a series of separate works, but an interrelated riddle. A picture of Bobby Fisher in a chess match near the entrance suggests as much. Take, for instance, two pieces titled “Those Who Produced The Wealth Were The Poorest No. 1 & 2.” Two black and mirrored Rorschach patterns had been formed by pressing two canvases together. These canvases hung on two separate propped pieces of plywood. The oppositional and anthropomorphic works echoed the action of the brothers themselves. The doubling continued in two columns made of clumpy handfuls of plaster and slathered in shiny gray-black paint. The gushy forms of “Column No. 1 & 2” were tactfully grotesque and inviting. The pieces had a matter-of-fact construction that was decidedly anti-aesthetic. Some of the gestures came off as a bit hackneyed, like the two monochromatic mustard paintings that hung close to the ceiling and were labeled as a response to a paint-covered cinder block. But what the individual pieces lacked in material complexity or legibility, the collection made up for by activating the exhibition space as a site of comparison. (Dan Gunn)

[…] “Either Both/And or Neither/Nor” got some love from New City.  I don’t think Scott Projects has regular hours, but if you haven’t seen this show, YOU SHOULD. […]