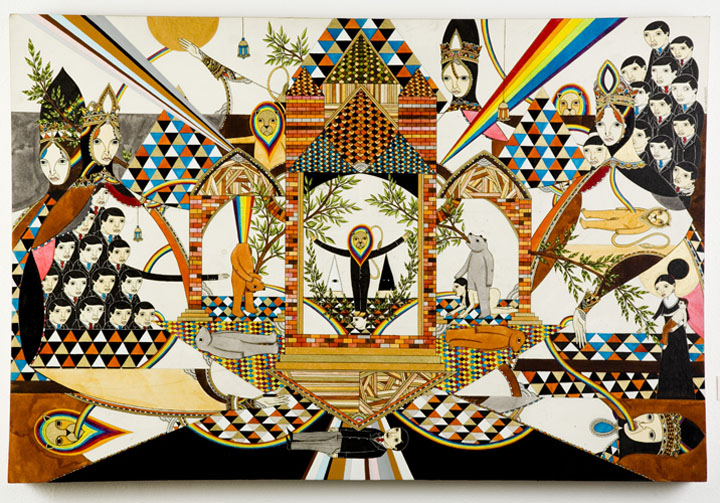 The opening reception for Richard Colman’s show “Opera Pink” at Phaiz maintained the gallery’s reputation for bringing LA-cool to Chicago. With Shepard Fairy, Dalek and Ron English as contemporaries, Colman’s show is, as one local artist put it, “somewhat of a big deal.” The opening drew a host of artists from a variety of different scenes, from the academic set to the graffiti crowd. The venue was continuously packed all evening—a who’s who of Chicago’s own artistic community with Dalek (who was involved with production of the show), photographer Mireya Acierto and DJ Sadie Woods. While Colman says that he intends his product to be “thought-provoking,” the strength of this show, and his work in general, is its visual joy. His work is gorgeously sweet in a flat, one-dimensional and excessively repetitive style. These are design motifs found often in “outsider” art. Rainbows of color, including gold, create a sense of hope and positive feelings. Colman’s work borrows the graffiti esthetic on its own terms; in the gallery, it tends toward installation, or an overall mural-like approach, rather than a focus on individual canvases. Absent were titles, an artist statement, and even pricing information. Was this a symbiosis of graffiti-commercial crossover work, or the hip affectation of an in-demand artist? (Sara McCool)

Through March 22 at Phaiz, 673 North Milwaukee.