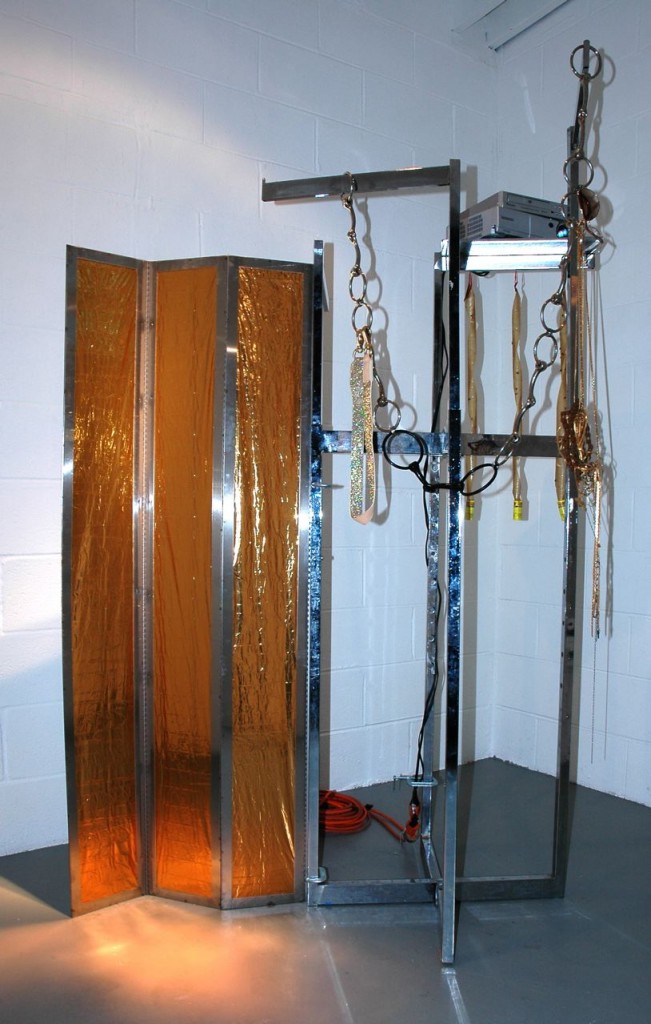 Self-loathing and the sensual caress of hard against soft, flesh against flesh, are starkly juxtaposed in Shane Aslan Selzer’s ultra-cryptic video installation titled “Here is Where it Is, Between Us,” at The Suburban. Selzer’s piece relies on a broken-down clothes rack as its main armature, a structure from which hangs a thing called a snaffle which is used as a taming bit, along with a scuffed-up gold strap, a knot of cheap jewelry, a pair of busted sunglasses, and three repellent strips of well-populated flypaper. A small gold foil-paneled screen creates a partially obscured space suggestive of a dressing room or stage wing. The stop-motion video depicts two hands, one small, female and white, the other larger, male and black, tossing objects (a paintbrush, a hammer, an open switchblade) that appear deceptively feather-light as they float downwards. Occasionally the hands brush against each other as the objects are exchanged.

Selzer’s installation is an intuitive and self-reflective exercise in looking, seeing and, yes, in feeling, a soiled and vaguely sadomasochistic apparatus that encompasses the entire room, from the coiled electrical cord powering the projection to the cold, hard floor you’re standing on. It’s incredibly off-putting and intractable, a conceptual tease that refuses to deliver the goods. But if we quit trying to make it all add up and instead let the contradictory associations and affects it evokes wash over us, the piece becomes strangely liberating, too. It’s in the combustive abrasion of expectation and experience that the “Where” of Selzer’s title is found. (Claudine Isé)

Through March 12 at The Suburban, 125 North Harvey Avenue, Oak Park. By appointment.