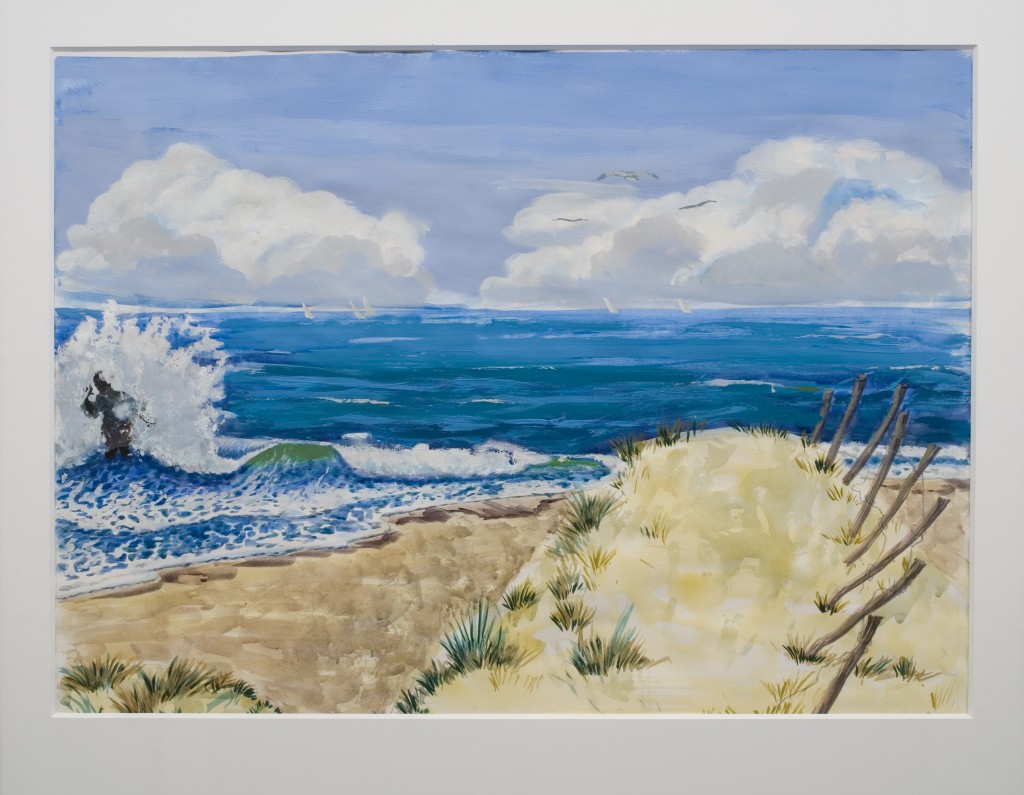 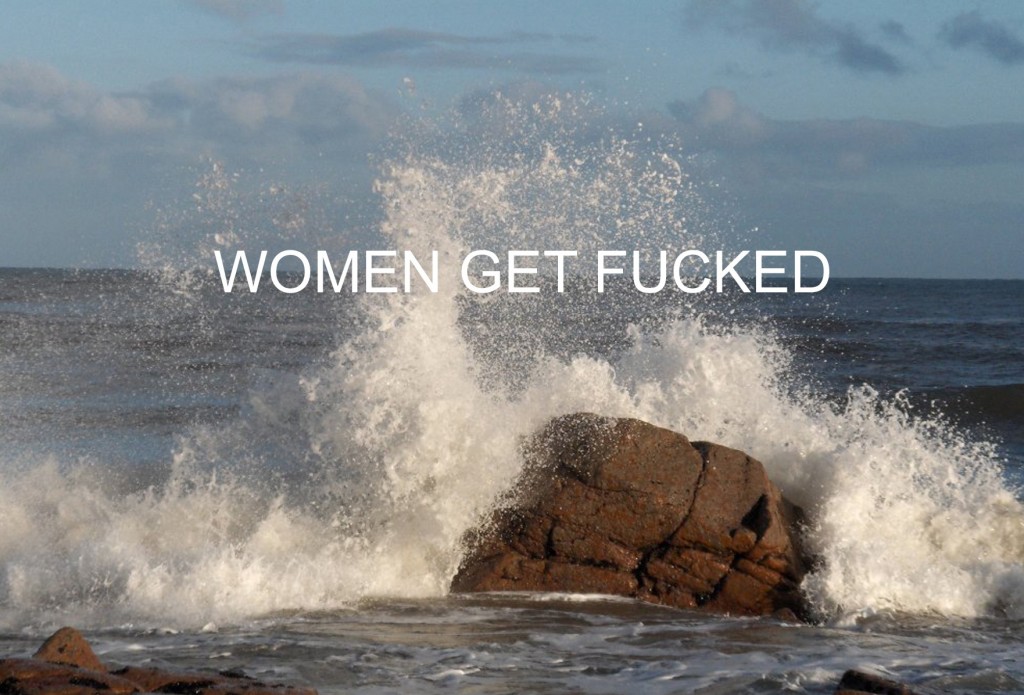 This week I found a very similar image in two different exhibitions. The perspective is from the beach, looking seaward. There, against a cloudy horizon, a large wave breaks dramatically causing a frothy white cloud to rise up. In one image, by Kerry James Marshall, the wave splashes against a bracing figure who stands thigh-deep in the water; in the other image, a promo card for the exhibition “Women Get Fucked,” the wave crashes against a large rock. This image of unbridled nature could variously serve as an inspirational poster or as a romance novel cover, but here they’re positioned to speak about race in one exhibition and gender in another.

Just when you think you’ve shelved the history book on identity politics, chalked it up as a style that climaxed in the 1990s, and after Kara Walker has exorcised her demons, and black art is now post-black, they return and ask to be “reconsidered”—again. Just last April the Renaissance Society rolled out “Black Is, Black Ain’t,” a large group show that explored representations of African American race. One of its strengths was the inclusion of non-black artists, providing a thesis that ‘blackness’ is available to anyone willing to grapple with its history. Today, we have a new exhibition that opens much of the same dialogue. “Across the Divide: Reconsidering the Other” is on view at the Illinois State Museum.

Similarly, there were no less than five feminist-themed exhibitions in Chicago last year, including “Ladylike” at Gosia Koscielak Gallery and “Are We There Yet? 40 Years of Feminism” at ARC Gallery, as the massive retrospective “Wack! Art and Feminist Revolution” toured the country. Now, “Women Get Fucked” is on view at Alogon Gallery. This is (yet another) all-female group show starring women who may or may not be making art about femininity.

In “Across the Divide,” Kerry James Marshall’s untitled painting of a figure walking into the ocean was first shown in “Black Romantic,” his New York exhibition held at the same time as “Black Is, Black Ain’t.” (Marshall is a huge figure here in Chicago, and his exclusion from the Renaissance Society show was conspicuous.) The seascape watercolor painting revisits the theme of the sublime, or how nature can lift us up—a very popular notion in art in the eighteenth and nineteenth centuries. Marshall’s revision to include black people in nature’s aesthetic bounty derives wholly from Winslow Homer, who painted crashing waves when they were in vogue, and heroic blacks when they weren’t.

The current (and tired) dictum for both feminist and race-oriented art is that identity is a construction. Gender is mutable, race can be purchased, sexuality is a shade of lipstick and Rubenesque women are no longer considered beautiful, but they ought to be. The antagonist in this discourse is “essentialism,” that our identity is an expression of something inborn. But proponents of Postmodernism say there is no archetype, and nothing is natural. This is why the archetypal image of nature—the crashing wave—is so perplexing to see in both exhibitions. It is an old-fashioned representation, as productive as physiognomy. 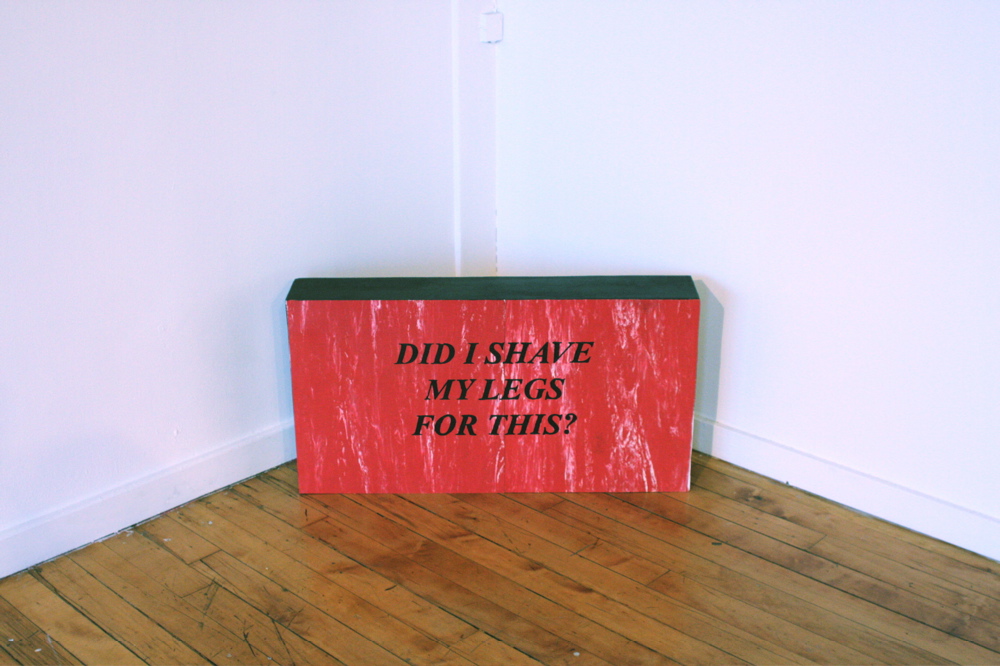 “Women Get Fucked,” true to its namesake, features a lot of strong and provocative work. The title updates a 1975 feminist screed called “Nobody Needs to Get Fucked.” Kari Altmann’s “Soft 404” opens the show with the numbers 404 displayed on a laptop, akin to the connection error message on web sites. Here, 404 is a coded way of saying that your assumptions may not be found; this is unknown terrain. Some works don’t address feminism at all, presumably as an act of defiance, whereas others happily take it up. Hayley Silverman and Emily Shinada’s video features a salacious scene of Shinada enticing viewers with air French-kisses, lip smacking and drool. Titled “SARS,” it pairs desire with disgust. Annie Purpura’s photograph shows a vision of her ex-boyfriend’s head, made from lasagna, blown to bits. Maliea Croy memorializes John F. Kennedy, Jr. by pairing an image of the bathing-suit-clad hunk with a bag of rocks weighing 187 pounds. Natalie Labriola also makes a monument by inscribing country singer Deanna Carter’s lyric, “Did I shave my legs for this?” on tombstone-shaped linoleum.

Desire—its dangers, pitfalls and even its sweetness—is a common theme in feminist-oriented shows. Interestingly, desire also makes an unexpected visit in the show about race. Many objects in “Across the Divide” are loaned by Dr. Daniel S. Berger, a self-identified gay man, an AIDS researcher and contemporary art collector. Works by Rashid Johnson, Carrie Mae Weems, Kerry James Marshall, and Glenn Ligon (whose “Negro Sunshine” also appeared in an altered form in “Black Is, Black Ain’t”), all from Berger’s collection, help to round out a theme on African-American identity. Berger, who is not black, collects, in part, black art. He says that he sees similarities between homophobia and racial prejudice, and conflates gay and black plights for equality. Although, African Americans did not support gay marriage in the Proposition 8 battle, a new sort of civil rights movement is in progress. Berger is motivated to marry their forces. His support, as a collector, gives artists freedom to do what they do best.

“Across the Divide: Reconsidering the Other” shows at Illinois State Museum in the Thompson Center, 100 W. Randolph, second floor, through May 8. “Women Get Fucked” shows at Alogon Gallery, 1049 N. Paulina #3R, through March 22.