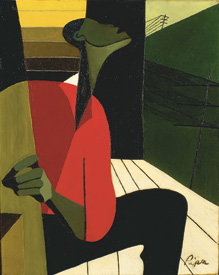 Between 1929 and 1948, Chicago’s Julius Rosenwald Fund, among its many other contributions to African-American life, offered fellowships to twenty-two African Americans in the visual arts, almost all of them represented by their paintings, prints, sculpture and photographs on display in the Spertus Museum. It really was an amazing project—selecting both established and emerging talent based on both past achievement and socially relevant projects like the one proposed by Rose Piper: “I want to do a series of paintings depicting the folk Negro as he comments on himself in his blues.” Some projects involve living with a family on a North Carolina farm or traveling to Haiti or the Sea Islands. And, happily, some of them produced some of the most moving American art of its time, like the “Legend of John Brown” series by Jacob Lawrence and the “Negro Woman” series by Elizabeth Catlett. Eventually, grants were given to thirteen white southerners who worked on racial themes, and in its final year, with a new jury that included Katherine Kuh (the maven of modern art in Chicago), even an abstract artist, Ronald Joseph, was chosen just to express himself. Overall, the quality is very high, even if the figurative styles being used would soon be marginalized by the onslaught of Abstract Expressionism. (Chris Miller)

Through August 16 at the Spertus Museum, 610 S. Michigan.