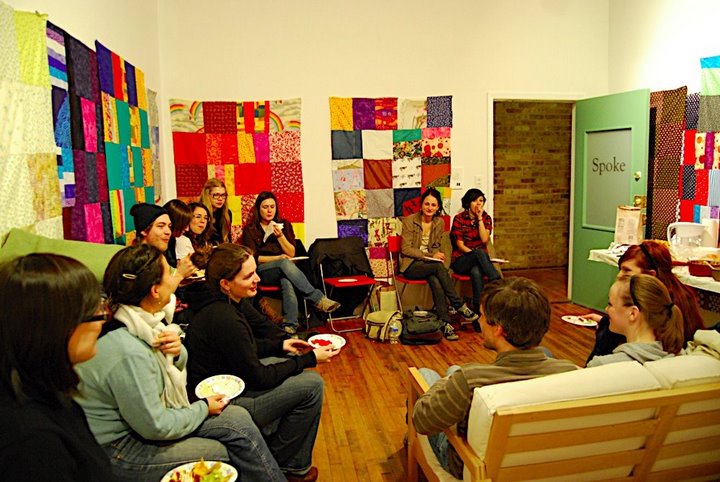 While they were still MFA students at the School of the Art Institute, Monica Herrera and Heather Mullins cut a hole in the wall that separated their two sculpture studios. Although this “window” was not condoned by SAIC building management, it represented the artists’ commitment to forms of collaboration and exchange. The opening challenged the sanctity and isolation of studio work with neighborliness more familiar to “I Love Lucy” than a competitive studio-arts program. Unwilling to relinquish their conversation and partnership, Herrera and Mullins teamed up with textile MFAs Rachel Moore and Rana Siegel in search of a space that would accommodate studios for each artist and an initially undefined open area where they could continue to foster collaborations, community-based projects, and creative public programming.

Their current project, Spoke, emerged after the group secured the old Gardenfresh space in the West Loop Gallery district last fall and designed an events-and-exhibitions program that would emphasize spontaneity, experimentation, inclusion and conversation against what they saw to be a limited and exclusionary gallery system. Many collaborations encourage artists to subsume their practices beneath a shared, singular rubric, but Spoke’s name was chosen to draw attention to the individual integrity of each part of the collaborative enterprise and this is its central strength. Herrera, Moore, Mullins, and Siegel have thriving studio practices that provide the basis for the uncontrived, lived-in atmosphere they’ve created at Spoke.  This informality invites dialogue (and naps!) and is emblematic of how the women hope the project develops.

Spoke is blithely committed to preserving the space’s uncertainty—its multifunctional existence as a platform for arts programming, gallery-style installations, community events, social activism, and conversation.  This fungibility is what makes it stand out as an opportunistic organization, one flexible enough to re-imagine the dialogue between creative enterprises and the vast potential publics that exist for contemporary art in Chicago. Spoke is currently presenting “The Binford Experience,” which is viewable while artists Andrew CopperSmith and Keith Skogstrom construct various mechanical apparatuses in an installation whose completion will be celebrated with a closing reception. This temporary and somewhat ephemeral project typifies the provisional and functional aesthetic of Spoke as they invite audiences to observe the artists’ working.  Will Spoke be able to capitalize on its proximity to a recognized gallery circuit in order to connect these audiences with new ones?  In this case, failure would only be part of the process. (Rachel Furnari)