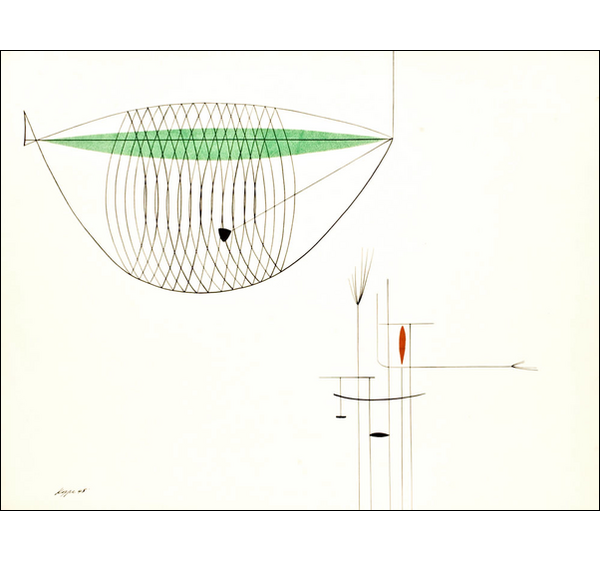 Postwar Americas loved to assemble aquaria of small, tropical fish—their slender, floating, shimmering, linear bodies being such a welcome relief from the gritty, heavy, earthbound world of war and economic depression from which they had just escaped.  And when they weren’t expressing their angry, suffering selves, American artists also seemed attracted to those qualities, especially in the world of commercial design, as exemplified by the Bauhaus, and its American outpost, the Illinois Institute of Design here in Chicago. In 1937, Richard Koppe came here to study with Moholy-Nagy, Archipenko and company, and in 1945 he returned to head the IIT Department of Visual Design. And he loved fish! They appear not just in the mural, menus and tableware that he designed for the upscale Well of the Sea restaurant in the Sherman Hotel, but also in his abstract drawings and paintings, now on display at Richard Norton Gallery. His work is light, whimsical, and linear—just like the fins of a 1957 Chevy. (Chris Miller)