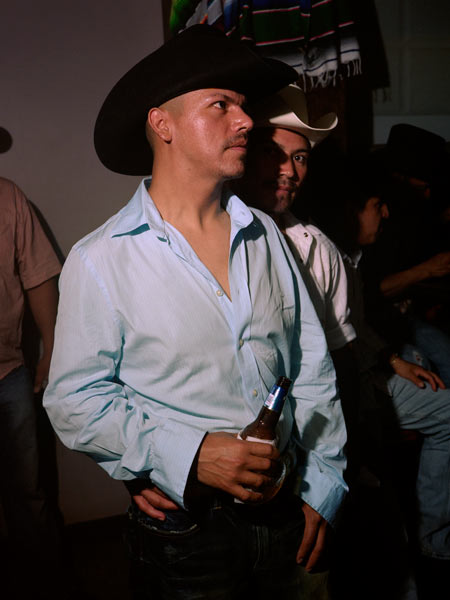 The work of Chicago artist Abraham Velaquez Tello tackles the issue of gender identity through photographing the traditional and structured world of Mexican-American machismo. Having just opened the group show “Evita el Exceso” at the Chicago Art Department with the Tripa Collective, an organization he founded with artist Jova Duran in 2007, Velazquez is currently working on the “Machos” project, a book aimed at documenting Mexican male subcultures, such as the luchadores, or Mexican wrestler, and the caballeros, or cowboy.  Velaquez’s photographs depict the multiple ways Mexican males express and define their masculinity. One work shows two caballeros, an ideal—now largely ironic—of masculinity in both American and Mexican cultures, within a small and possibly secret embrace. Much of the artist’s work is quite intimate and sensual, including even his most “masculine” subjects, such as the luchador within his wrestling ring. These photographs ask: Is machismo the same in heterosexual and homosexual contexts? Are there not positive attributes of machismo evident even in a progressive culture?

Velazquez’s participation in the Tripa Collective is for the simple goal to “make good work.” However, there is also much more to it, stemming from his “realizing there was little support for Latino artists and representation in the contemporary art world.” It is important to Velaquez and the collective to note, “while some of our work deals with culture and heritage, much of our work does not. We do not want to be known as good Mexican artists. We want to be known as artists who challenge systems and force people to deal with controversial issues.” (Sara McCool)