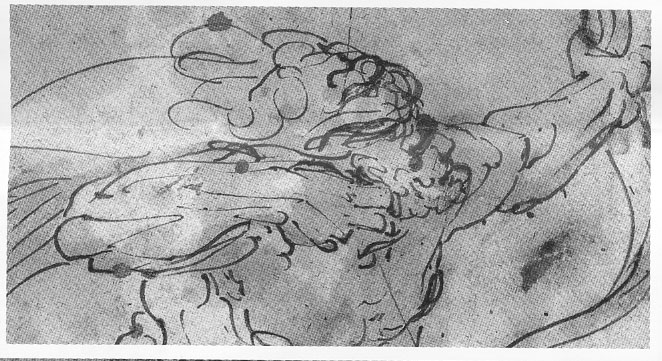 The problem with Italian Renaissance drawings is that they’re boring. Highly skilled? Definitely. Of historic interest? For sure. But so would be an exhibit of sixteenth-century office furniture. Mostly, these drawings, on loan from the Prado Museum in Spain, are just working sketches for mediocre paintings, and they’re not intended to be contemplated on their own. But still, there are some magnificent exceptions, which are usually the ones that the curators like to highlight. Luca Cambiaso’s “Hercules the Archer,” which is on the brochure for the collection, is a stand-out. Isidoro Brun (1819-1895) was the Spanish engraver and restorer who assembled a collection of more than 3,000 European drawings, seventy of which have been chosen for the current tour. He was also something of a specialist in Cambiaso, collecting more than fifty pieces, though many are now judged too weak to be authentic. But the four now being shown in Evanston are all masterpieces. More than just readable narratives, they are tours de force, where every line, waxing fat or thin, controls the imaginary space it leaves behind, creating a world that is more mythic than merely human. They alone are worth the trip, but fortunately there are also some very interesting working sketches, like the tiny anatomical studies that Michelangelo made for the Sistine Chapel. Chicago has gotten two surveys of Renaissance Italian drawing over the past year, and hopefully the next show will focus just on the heavyweights, like Guercino, Cambiaso or the Carracci family. (Chris Miller)