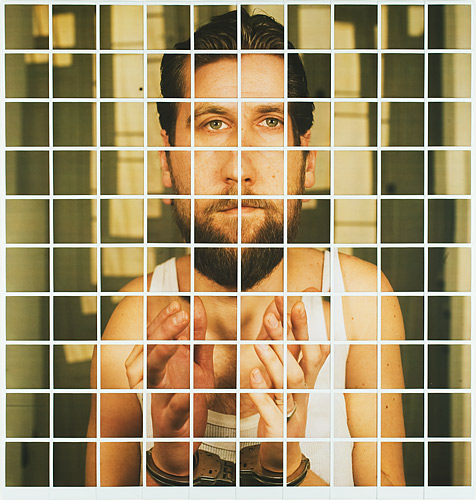 German photo-artist Gordon Muehle chooses to pay homage to his “Heroes”—the people who have influenced his life (presumably for the better)—by running them through a postmodern photographic mill in which he takes close-up color Polaroid images of aspects of their faces, composes them into more-or-less coherent headshots, places those into settings that are presumably meaningful to his subjects, and then—as the finishing touch—places the photo-works behind a white grid that looks like super-elegant prison bars. The facial deformations attendant on Muehle’s practice call our attention to them, depersonalizing his subjects; putting them in virtual jail begs for psychoanalysis: Is he trying to capture his friends or punish them? In one case, Muehle is admirably direct; a bearded young man in a truck-driver’s t-shirt holds up his handcuffed wrists as he stares at us with an intense luminescent gaze. We can only imagine what the back story might be. (Michael Weinstein)