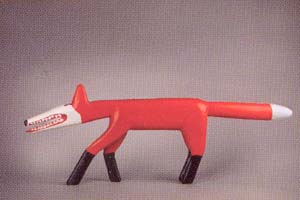 What is so appealing about outsider art? If it has any ideals, they are strictly solipsistic. And if you enjoy virtuosity in design or drawing, you’ll have to look elsewhere. But in the best pieces, there is a kind of triumphant swagger that says, “this is my life, and I love it!” For more than forty years, Chicago stockbroker Robert Alan Lewis has been collecting “outsider art,” which he has defined as things that he really likes, but would never find in an art museum. But now, at last, they can be found—at least in Cincinnati—where 160 pieces from his collection are on display, selected from the more than 400 wild, tragic and/or bodacious pieces that he has promised to donate to the museum. For several decades, Chicago has been a center for this kind of work, with galleries like Phyllis Kind and schools like SAIC, and this exhibit is a good opportunity to compare the real outsiders and folk artists with the trained artists who emulate them (Ray Yoshido, Karl Wirsum,  Roger Brown, etc). Collecting is always about the eye of the collector, and with outsider art, that’s especially true because outsider artists do not come with professional credentials, and most of their work is not just boring, it’s dreadful. (Remember the paintings of John Wayne Gacy and Dr. Kevorkian?) There are only a few delightfully inspired madmen, and Robert Lewis has done a pretty good job of finding them. (Chris Miller)