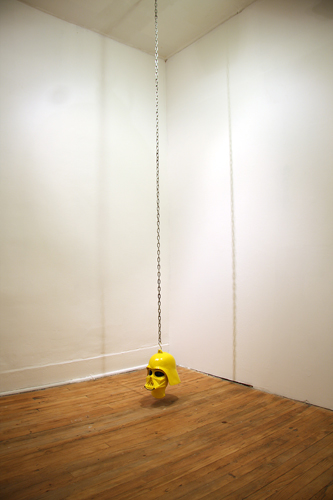 The diverse pieces presented in Samuel Lipp’s “Dedicated to the Oneness,” including bronze and wood sculpture and DVD installation, share a minimalist simplicity that reinforces their differences. This seems counter-intuitive to the show’s theme, which addresses the loss of the one’s unique self in order to join a greater united whole—an idea dating back from Dionysian rituals that continues to modern New Age teachings. More potent are the pieces’ powers of suggestion—an ambiguity that hints at a possible undercurrent, most likely religious, linking them together. “Coming,” a black laser print of linear shapes on white paper, extends off the wall and onto the floor, grounded by a large rock. Seemingly declarative, its symbols could represent an unknown message shared by “Heated Floor/Sun Quest,” a piece whose tiny onyx pyramid is warmed underneath a large tanning canopy. The centerpiece of the show, “Full Spectrum,” resembles a large, carpeted cat’s scratching post. A narrow plane extends from a corner of the square base to a vertical tower in the opposite corner. A sleight of hand misdirects the viewer’s focus; while occupied with the ascending plane and tower (and its obvious allusions to a journey of enlightenment), the viewer neglects to notice the plane’s base extends to the square’s outermost edge. In an M.C. Escher-like dilemma, the structure is actually a closed system, and any creature would need to leave the original square in order to “ascend”—perhaps a cynical commentary from the artist, who never commits that such enlightenment is easy, or even possible. (Patrice Connelly)