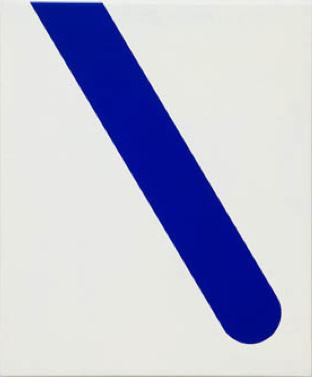 For Dutch artist Jan van der Ploeg’s first exhibition with Shane Campbell Gallery, he brought his paintings to the United States in his luggage, reminding me of the “Suitcase Paintings” exhibition at the Loyola Museum of Art last year, which featured small-scale Abstract Expressionist work that was (or could be) likewise transported via luggage.

In both cases, attention to scale is very important. Van der Ploeg composes his hard-edge geometric abstractions so that even though they are physically small, they have a large presence due to the sense that their organization could extend beyond the edges of the canvas.

Van der Ploeg describes his painting as being like a street sign rather than a “window,” a sentiment I have heard echoed by Chicago artists also working in hard edge geometric abstraction. It would seem that this reinvigoration of the genre is an international phenomenon. (Abraham Ritchie)

Through May 9 at Shane Campbell Gallery, 1431 W. Chicago.