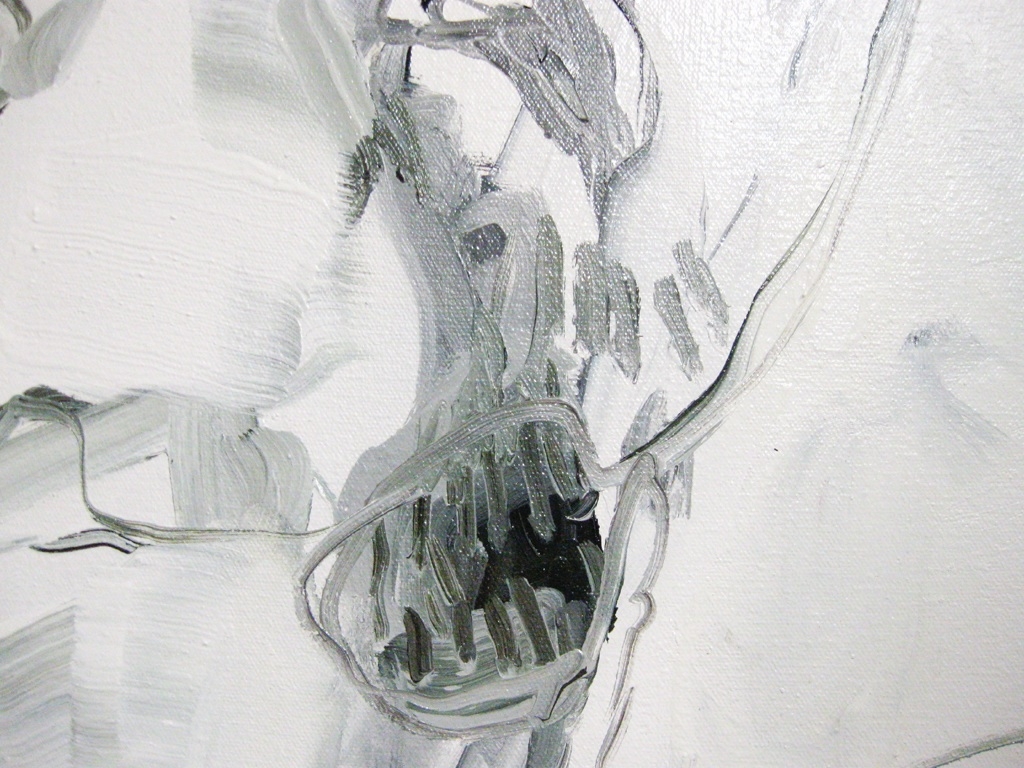 This show is a departure from the various “surrenders to Beauty” that have been on offer at Carrie Secrist Gallery for the past few years—big things by Eva Schlegel or Hiro Yokose, for example, that—these days, at least—evoke a Romantic sublime inflated by arcane financial instruments. DeGiulio, by contrast, works with pared-down, anxious lines, full of a mood of crisis. The paintings in “That House is On Fire” are mostly black-and-white, and are inscribed on a layer of soft wax, making the line look sculptural. The brush draws a mark on the soft wax and records a fugitive state. One recurring figure is that of a line terminating in a hook: a deflection, a retreat or détournement, signaling a hesitation, a rebuke; when gathered in one painting, these figures become arguing, contending voices, as can be seen in “Flush” (2008). Reiterated marks are effaced with white paint, and then more marks are made.

Most of the paintings in this show oscillate between representation and abstraction. The title of “Snowden” (2009) recalls the gunner in “Catch-22” whose minor leg wound is carefully bandaged and re-bandaged, until Yossarian opens his flak jacket and Snowden’s intestines spill out. This picture is made up of painterly gestures towards technical drawing, but the re-bandaging with white paint is there too, layer upon layer, and suggests a body slowly going cold. The very creepy piece entitled “Needle” (2009) seems to allude to a stylus recording on wax or even flesh, as well as to a channel through which a new substance is introduced.

The paintings here enact things that are unexpected, unforeseen, singular. In DeGiulio’s work, the mark is something that has “come to pass,” something that has emerged only to pass away, leaving a mark of the event that asks to be acted upon—imaginatively or otherwise—every time it is encountered, as in the phrase, “That house is on fire.” (David Wise)