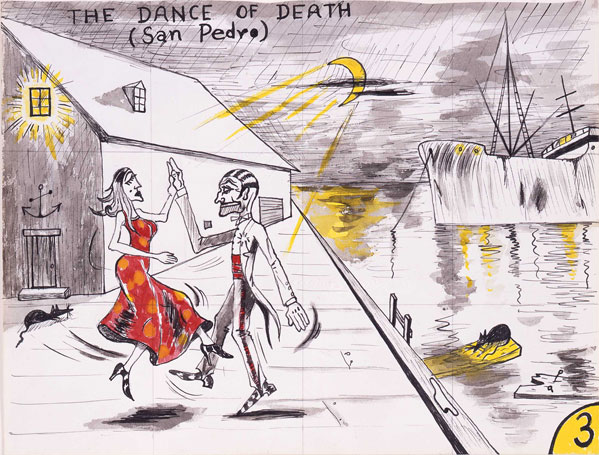 Everything about the new H.C. Westermann exhibition at the Smart Museum feels intensely personal, including the informal exhibition title, “Your Pal, Cliff,” which references the artist’s signature sign-off. This oft-repeated phrase appears in the many letters to friends and colleagues on view including the likes of artists William T. Wiley, Ken Price and Ed Ruscha. But the collection also compellingly chronicles Westermann’s love affair with his second wife and fellow artist Joanna Beall. Joanna’s name appears frequently in sculptures, letters and hand-drawn cards. Their collaged cards and drawings for one another reveal the playful interchange between the two. Westermann’s keen woodworking skill appears not only in the sculptures but also in gifts like a carved walking stick for Joanna. The top of the spiraling staff is adorned with a heart that sheds two black tears downwards. The heart also doubles as labia and we’re told that Westermann’s matching staff was headed by a phallus and balls. Easily the most romantic art exhibit in a long while, it would begin to feel a little voyeuristic were it not so persistently endearing. Westermann’s production had roots in the past with traditional materials but he looked to his peers and to the future. Many of Westermann’s drawings could be mistaken for contemporary examples, as they presage many East and West Coast practices. But the force of this exhibition is in Westermann’s biography: an artist who surrounded himself with like-minded individuals, lived generously and created objects with cultural and ethical integrity. (Dan Gunn)

Through September 6 at the Smart Museum of Art, University of Chicago, 5550 S. Greenwood.

1 Comment
Inline Feedbacks
View all comments
Your Pal, Cliff at the Smart Museum - News from the Division of the Humanities