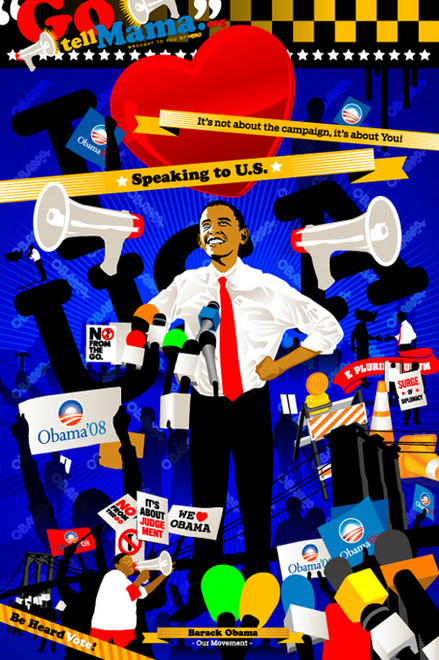 The current show at the Chicago Tourism Center brings back the familiar advertisements from Barack Obama’s 2008 presidential campaign and places them with original advertisements from “the people,” whom, in this case, are visual artists hailing from Chicago to the UK. The show’s prevalent mediums are those most appropriate for disseminating information on a large scale; the majority of the works are prints, graphic designs, and animation. Curated by Ray Noland, Scott Thomas and Nathan Mason, the show successfully contrasts the similarities and differences between the campaign’s medium and message and that presented by individuals. The show’s “official” half, the campaign materials, simultaneously presents Obama as a larger-than-life character as well as a man of the people. (Not surprisingly, the campaign’s star is the iconic “Hope” print by Shepard Fairey, presented along with its lesser-known siblings.) The artists have more flexibility in presentation and message; they employ cereal mosaics and original drawings, depict Obama as Abraham Lincoln, an African-American history-maker and a b-ball player, to offer their own, often emotional, spin on the campaign’s sentiments. The show doesn’t attempt to elevate street art to a fine art status as the pieces are never implicitly removed from their original context. However, Obama-inspired art is beginning to blur the lines between the two; an Obama “Hope” portrait by Fairey, similar to those in “Officially Unofficial,” was installed at the National Portrait Gallery in Washington , D.C. this past January. Apparently the political canon will not be the only one challenged under Obama’s presidency. (Patrice Connely)

Through May 31 at the Chicago Tourism Center, 72 E. Randolph.