It was a night where anything was possible. The warm sky and the short-shorts were new, but the crowd seemed familiar. Like islands of misadventure where castaways crawl up to cough crumpled air were the paintings and sculptures amid a sea of drunks. Someone threw up on a painting of their own making, which was entirely scripted, but it got me thinking that if art is a forced excrescence of the soul (or the mind, whatever), then whither the laxative? A tantrum? A philosophy? No, the best lubricant is a laugh. This being the art crowd, though, we smirk and blow air through our noses because the stuff isn’t really hilarious; it’s just cutesy or cynical—fun but not funny.

The press image for the group show “Now That’s What I Call Painting” was designed to mimic the “Now That’s What I Call Music” pop compilation (the 72nd volume was just released on CD), which is an excellent design tactic because the paintings on view are catchy, blasted on repeat until the hook that gets you every time becomes worn to a nub, here today and maybe gone tomorrow. One painting looked like a Funfetti sheet cake. Unlike its peers, the cake painting leaned against a wall for no other reason than it could, looking great because that’s what we do these days. Feeling similarly dispassionate, I toasted my plastic cup of beer to it. Someone (name withheld) said that “fun is the Chicago style” (or maybe they said “esthetic”), and I couldn’t help agreeing that, although some of the paintings in “Now That’s What I Call Painting” may have been made with serious or painterly or artistic intentions in mind, here among the crowd they just came to party, hot messes among hot messes. 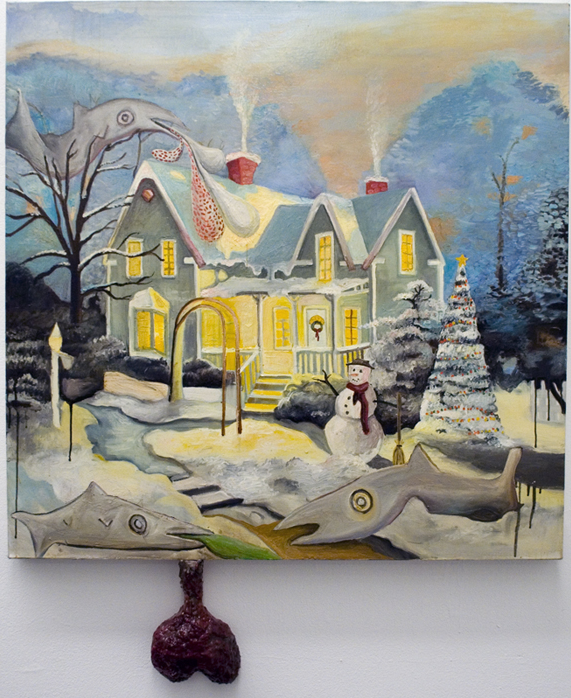 Painting by Patch Kientz, from "Now That's What I Call Painting"

I traveled from Scott Projects, which hosted the group painting show, to Alogon Gallery, to Eel Space and to Hungry Man Gallery, and down to Pilsen to Golden Age. Each show was an example of generosity—not just the hosts who welcomed crowds into their homes, but also the art was generous: forgiving if you didn’t like it, and forgiving if it sucked. “Hey, I want to show you something,” it says; even if you don’t want to go home with it, at least the opportunity presented itself.

“I want to show you something” is exactly how I’m paraphrasing what Marco said to me when I entered the shop that he owns with Martine, Golden Age. The store, which is one of two stores currently in Pilsen that sells artists’ books, and which recently reopened after getting a spiffy interior redesign, was open late to host a book-release party for Robin Cameron. She makes drawings of thoughts in diagram form—“mind maps”—using what looks like a typewriter, a pencil and a photocopier, then binds them with staples. Other stuff on view and for sale was a book of collected photos of odd or disgusting food displays, and some cassette mix tapes. Surely some of this stuff could well exist on a blog or something, but they don’t. Personally, I still like precious things, and I’m not going to detail right now why social media breaks my heart, but let’s just say that many artists I know still like to use material stuff, and they are not backwards or behind the times or anti-“social.” Viewing a sculpture by Ryan Fenchel. Photo by Paul Germanos

Stuff was also the premise of a group show at Alogon, called “Myth in Material.” Do the objects around us physically stop short at their tangible border, or does some imbued “myth” (spiritual or political) dematerialize, so to speak, their elements? It’s a question that doesn’t ever really get tiresome because some mysticism is involved. We might say that when an object transcends its own materiality and ascends to the life of the mind, it is “conceptual,” but “Myth in Material” sought to be magical instead. Stacie Johnson’s paintings were an apt choice, as they tend to gently steal glances through the scrim between this world and another one. Also, Ryan Fenchel’s coffin-type object, complete with afterworld astral projections and tiny druidic towers, took me out of the party and into art.

i thought that the “Funfetti sheet cake” (obviously a pop-tart) was positioned as it was, so that it pronounced itself as a sculptural object rather than a full on painting…….