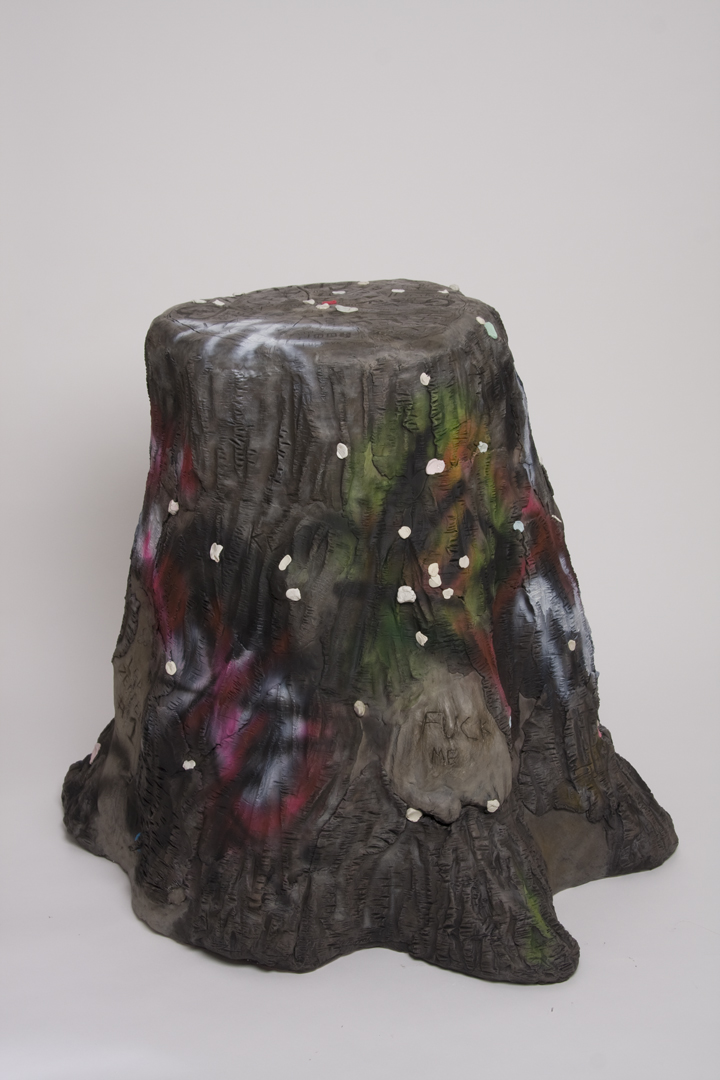 Ali (short for Alastair) Bailey is a recent transplant to Chicago, having moved here from London last July to be with his wife, Kavi Gupta Gallery director Kristen VanDeventer. The sense of personal dislocation Bailey experienced upon his arrival suited his work well, for much of “You Are Young,” his first solo show at Golden, involves a quirkily subjective displacement of the familiar.

Bailey thinks of his sculptures holistically, as individual aspects of an encompassing field of vision. At Golden, we see a sprout poking through a tear in an old baseball, and a pair of moldy helmet liners placed atop two crushed water bottles like mushroom caps. In the hallway, a glistening replica of a dropped ice cream cone evokes a child’s chagrin and an adult’s crestfallen impotence. Looming over it all is a creepily faceless figure, its head formed from a deflated basketball, its body a sleeping bag held upright by a hidden pole.

Some of the pieces are based on found objects, others are sculpted or cast. All function as three-dimensional snapshots that freeze a particular moment eternally in place. Because Bailey doesn’t own a car, he’s experienced Chicago mostly in slow motion. “A big part of my practice and my process is walking around,” notes the 27-year-old artist, who lives in Ukrainian Village and has a studio further southwest. “I walk through a pretty quiet, industrial part of Chicago where there’s lots of trash and everything is kind of run down.”

As he walks, Bailey amasses material, which ranges from roadside finds to thrift-store castoffs—things that inspire feelings of recognition or nostalgia. Back in the studio, “there’s a lot of play involved, and discovery. That’s important to me, to enjoy the process and surprise myself, to let things evolve and see how they start to do something new when you combine them with another object or make an intervention.”

Memory also functions as a ready-made. In this case, memory is both collective and subjective, as likely to be triggered by a film or a song as it is from lived experience. Bailey says “Stump (Led Zeppelin #1),” a dismembered tree trunk blistered with chewing gum and scarred with graffiti, is based on an image that popped into his head one day, “which is why it’s a bit more cartoonish as opposed to (those) that are more convincing” in their execution. “I try to approach how I make them in a way that stays close to how you actually imagine them or look back on them,” he explains.

“I just find something appropriate about making a still life of something very transient and temporary, and I want to give it a solid presence.” (Claudine Isé)

[…] an exhibition titled “You are Young” (the piece appeared in New City; you can read it here). Bailey is definitely what I’d consider to be ‘a comer.’ (Isn’t that a […]