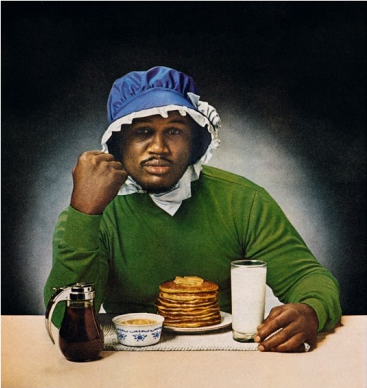 From straight documentary to cultural criticism of representation; from celebrations of tradition to biting postmodern play; from sentimentality to irony, this lavish exhibition is the most brilliant survey of recent African-American photography ever to hit Chicago. The contemporary stars–Carrie Mae Weems, Lorna Simpson, Willie Robert Middlebrook, et al.–are in the house, but so are less well-known lights whose works deserve long looks. For stabbing wit, no one is better than Hank Willis Thomas whose “Smokin Joe isn’t j’mama” (1978/2006) captures his chunky subject donning a blue bonnet as he sits leaning over a stack of pancakes with an air of bemusement. For the recovery of lost memories, Thomas comes through again with “The Oft Forgotten Flower Children of Harlem” (1969/2006), which shows the hippies in all their laid-back splendor hanging out on the street–icons of peace and love with a dash of Jimi Hendrix. Thomas does it all with panache, but that is just a slice of this stellar show. (Michael Weinstein)