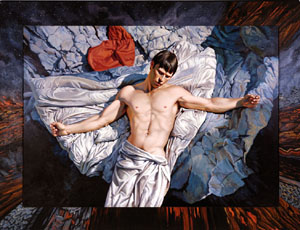 If his career had begun a few decades later, Ian Hornak (1944-2002) would probably have been making large-scale photographs instead of paintings. Indeed, his dreamlike landscapes seem to have been made in Photoshop, where one photo image has been superimposed upon another. The assertive qualities of good representational painting—the command of space, value and line—just aren’t there. But Andy Warhol didn’t need those qualities either—and Hornak’s paintings effectively present the hedonistic-tragic world they shared. His still-lifes catalog the best that money can buy, but is that enough?  A dark, lonely shadow seems to be creeping in from the center, as if all those high chroma colors, even if they bleed into the surrounding frame, were just not enough to keep us happy. His landscapes, which often superimpose images of sky and earth could well be advertisements for cemeteries, as they express the longing for eternal peace. The only figure painting in the show envisions “Asmodeus” (the lustful, Biblical  king of demons), appearing here as a handsome young dude who seems to be the title character from “Angels in America,” the  gay fantasia set in the same time and place (NYC, mid-1980s) in which the painting was made. Hornak was not quite the painter that Bouguereau was, but he offers us a similar world of material excess and spiritual despair, and this is the first exhibit of his work since his sudden death in 2002. (Chris Miller)