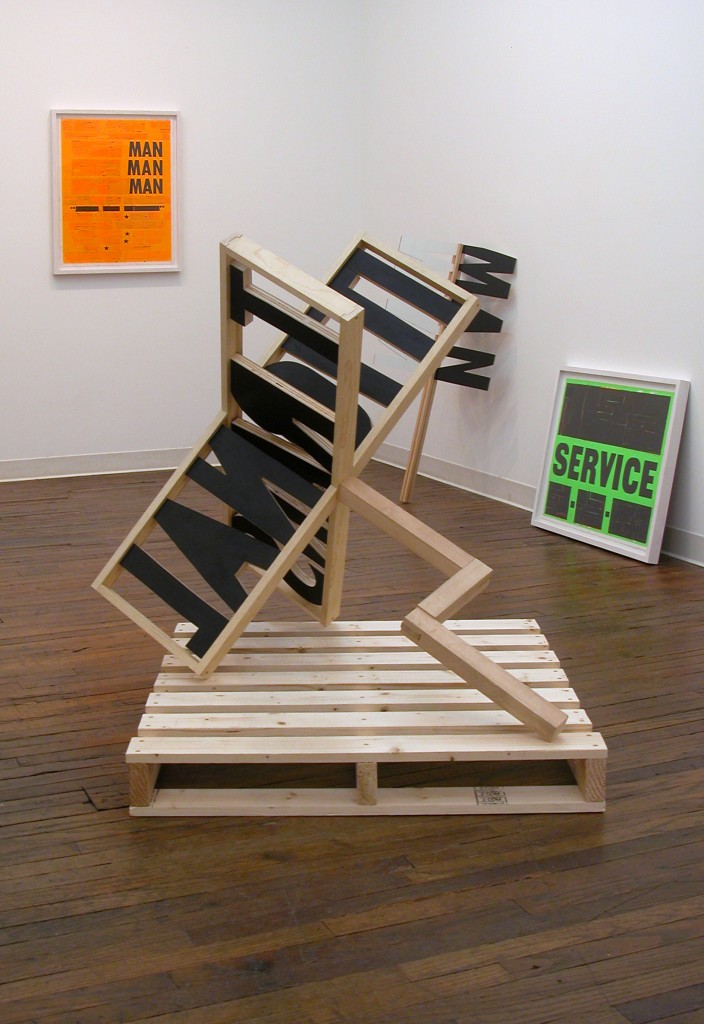 For “MAN MAN MAN,” his first solo exhibition in Chicago, Los Angeles-based artist Christopher Michlig continues his investigation of language and its myriad public vessels. On view are nearly a dozen framed fluorescent collage posters created from found advertisements; Michlig painstakingly cuts and pastes rectangular strips of cannibalized posters to alternately erase or abstract the advertisement’s original meaning, converting blocks of text into blocks of subtly undulating form and color. Most of the pieces in this particular grouping of collages retain a single word or phrase held in tense limbo among a vibrating mass of blips, punctuation marks, and concealed context, imbuing the language that is left with a spare and often wry poeticism. Among these works, however, I am most drawn to those that veer closest to abstraction and the complete obliteration of their original literal meaning. With the exception of “Lecterne”—a podium-esque wooden structure turned on its side, littered by three crumpled styrene “paper” wads, rectangular sections excised from its tablet-like top—the wooden sculptures occupying the center of the gallery are a bit less successful than the collages, and crowd the space. Presumably, the (over)abundance of work on display—sculpture and collage both—refers to “the notion that repetition simply indexes without achieving substantive order and understanding,” as cited in the gallery’s press release. There is a certain Pop sensibility at work here that is in some ways very effective, but the excess of work dulls the exhibition’s ambition as a formally sharp, severely selective, and subtly poetic simulation of a streetscape, ironically shifting focus back to the glut of advertising each of us encounters daily, and the way in which that bombardment leaves us numb and unsure of what to believe. (Kathryn Scanlan)

Through May 12 at Dan Devening Projects + Editions, 3039 W. Carroll