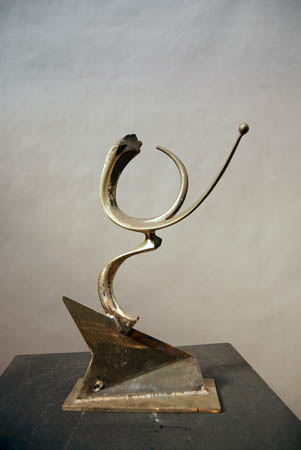 You can’t swing a dead cat in Chicago without hitting one of Richard Hunt’s peaceable public sculptures. The stacked totems of winged industrial blocks and holes sit outside hospitals, schools, libraries, churches and government buildings, but Hunt doesn’t exile his monoliths to the elements. Some of his pieces live inside buildings, like the appropriately titled “Oasis” inside the Kafka-esque Stroger Hospital of Cook County, and, currently, a collection of his less sizable work is under the roof of the David Weinberg Gallery.

Hunt’s public work has become shinier, larger and more ambiguous since the beginning of his career in the 1950s, and he’s had many opportunities to evolve: he has created and displayed more public sculptures than any artist. His smaller-scale work, like the larger, has become less and less anthropomorphic. Hunt has traded eyes, mouths and limbs for angular swoops, balanced curves and holes planted in blocks. Not to say that the viewer can’t find, say, a horsey or serpentine quality in his work; his sculptures imply an organic, flowing, upward movement. Even the lower-lying floor sculptures, like “Low-Flight,” a buffed, stainless-steel space-ship-snake-nest sprays its chunky twirls upward.

Hunt’s career and success are not just about the great pairing of a protestant work ethic and tremendous foundry skills. A market still exists for Hunt’s polished, swooping bursts of chunks, flames and tendrils. He has received numerous honorary degrees, a Guggenheim, and has enjoyed a retrospective at both MoMA and the Art Institute of Chicago during the 1970s. This year he will be awarded the International Sculpture Center’s Lifetime Achievement Award. For a man who considers public sculpture his second career, he’s not doing so bad. (Natalie Edwards)

Through May 30 at David Weinberg Gallery, 300 W. Superior