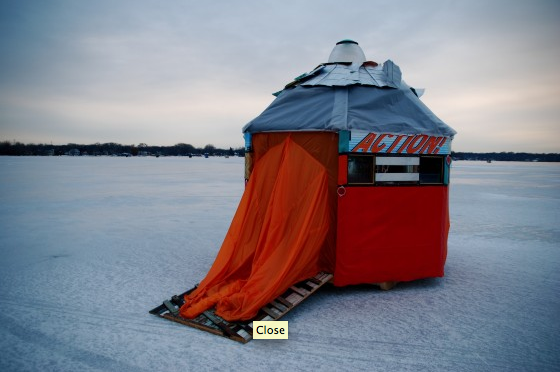 With seven other artists, Aay started No Coast Collective, and set up shop in a former bodega in Chicago’s Pilsen neighborhood. The studio and gallery, open since October 2008, just got a facelift to finally remove the convenience store’s leftover awning that announced ice cream and sandwiches. Now it is clearly its own enterprise: a purveyor of prints and posters, mix tapes, “fine crafts,” artist books and clothing. Several blocks away is Halsted Street, the downtown of Pilsen’s burgeoning art scene, with traditional white cube-style galleries, but No Coast is nothing like this; it seems more alive, more hand-built. Perhaps because it’s adaptable to hosting live music shows, or that the front of the house showcases stuff made from the studios within, that No Coast feels more like a community space than the white-walled fine art shops. 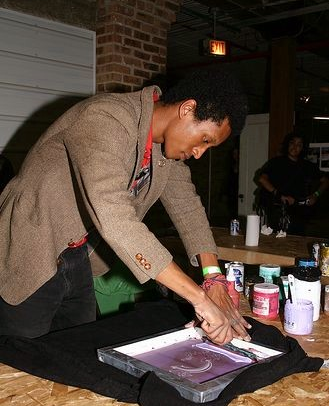 Aay is part of several groups in addition to No Coast. He’s a new member of Mess Hall, and he’s been running Chances Dances, a monthly dance party, in Chicago, for several years. Chances, and its new sister party, Off Chances, collect an entry fee that is repurposed into a grant for queer artists. Even Aay’s individual art practice relies on others to be completed. “Smile” consisted of silk-screened backdrops and masks produced by the artist, and invited participants to pose for photographs. It had an ecological bent, and turned wearers into mutants with crocheted facial malformations in an oozing fashion-meets-disaster diorama. “I’m happiest when people are enjoying themselves,” says Aay, “more than just looking at or silently contemplating art.” Although he admits that the ecological message may have gotten lost amid all the fun and dress-up, Aay believes that getting people involved is the first step to creating community and dialogue.

He calls this “semi-art,” in that something is set up for others to act upon. For the Art Shanty festival, a project that invited artist teams to co-opt ice-fishing structures atop a frozen lake in Minneapolis, Aay and friends created a fabric workshop, teaching visitors how to knit and sew; the finished projects adorned the shanty’s walls, insulating inhabitants against the cold. “It’s good to do things with people,” says Aay and, increasingly, Aay is doing good things. http://www.illcutyou.com/aay/