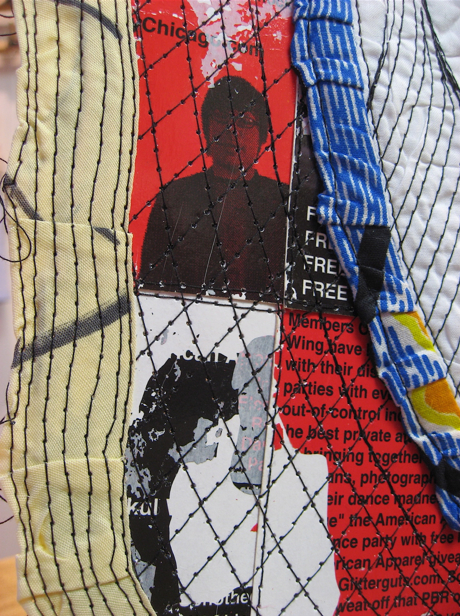 Strangers and neighbors leave bolts of fabric at Danny Mansmith’s doorstep. His storefront studio, with its door welcomingly ajar, and its street-level display window stuffed with fabric figurines, has been an unusual sight on this residential strip of North Damen Avenue, but now kids run in and point to the hanging pieces, and fabric scraps like small offerings are gifted. Danny is an incessant maker and a whiz with the sewing machine. Take a trip to his studio and your eyes will be crawling all over the art-saturated space. With fabric artworks hanging like flags from the ceiling and seamstress dolls crowding the corners, it feels a bit like a childhood visit to grandmother’s walk-in closet—which isn’t such a stretch since Danny easily recalls the clothes that his grandmother did make for him when he was a kid. A homemade terry-cloth sweater caused no embarrassment for little Danny, who wore the towel with pride until it fell apart. Perhaps this early comfort with homespun artistry spawned his experimental nature (Danny dropped out of art school rather quickly): sewn drawings; androgynous Adam and Eve sculptures; clothing with rival feminine and masculine connotations.

As a self-taught artist, Danny found his own taste and style as a fashion designer, and there’s crossover between his wearable garments and his drawings. These resemble the waif-like and stylized illustrations form fashion magazines, with smeary makeup faces protruding like masks. Many figures are slightly contorted, as if caught in the act. Their clothes or skin or surroundings swirl like wind pattern maps. Colors bleed from a gash. The garments act as bandage, binding emotional charges with cloth.

Danny is no friend to minimalism, and he wears his individualism on his sleeve—in fact he likely made the sleeve in his workshop, and hand-stitched the hem and added some subtle detailing, all in a day when ten other things were also made. http://scrap-dannymansmith.squarespace.com/