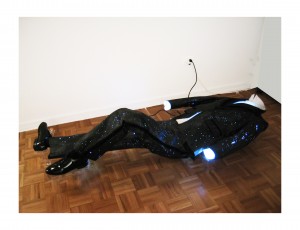 Liz Nielsen’s head is in the stars—or at least that’s what she wishes. She probably reads more science magazines than art journals, and the Large Hadron Collider recently built in Switzerland, which, it is hoped, will recreate subatomic particle conditions a split second after the big bang, has Liz buzzing. Never leaving Earth is like never going outside your house, she says in the tone of a hopeful agoraphobic, and as much energy and excitement she has for outer-space, the best way for her to get there now is through her art. It’s a fine marriage, too: art and science, both approaching the world as if it were a question. So, gasses, cosmic explosions, parallel universes and deep space are the stuff of Liz’s art, and her medium is photography, tinkered with in a closet in her home, Narnia-like.

Liz has a ton of energy for what she does, but she also likes to have fun. Recently she’s been making animal-hybrid doodles on Shrinky Dinks, almost as alternate life forms for the stars and planets she produces. In the oven, the drawings shrink (as is the brand’s specialty), and a new herd of palm-sized galactic animals are born. “I’m not interested in the knowable, things like God,” she says, “but I’m drawn to the unattainable.” Holding the shrunken drawings on your hand, they’re precious but strange, like domestic cats, she says, “exotic, beyond exotic,” but cute. 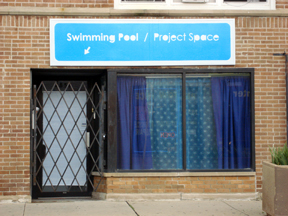 With her pal Josh Kozuh, Liz operates Swimming Pool Project Space, a storefront gallery that’s probably the first of its kind on this strip of West Montrose Avenue, a pass-through drag of brick-faced apartments and grated-window nail salons, in the Albany Park neighborhood. Like many artist-run spaces, its location is unlikely, as is the way it functions, for Liz and Josh don’t run it as a hang-a-painting-on-the-wall gallery. The programming at The Pool (as the rectangular and blue-painted floor is affectionately called) “is biased,” says Liz—which is to be expected of a gallery not dependent on a dealer-collector system. “I’m interested in what’s beyond ‘good,’” admits Liz; “just relevant.” The challenge has so far been met with an endurance-hugging performance by Young Sun Han, a multifaceted group video show, and Shannon Goff’s horse-drawn carriage constructed of cardboard—each a surprise following another.