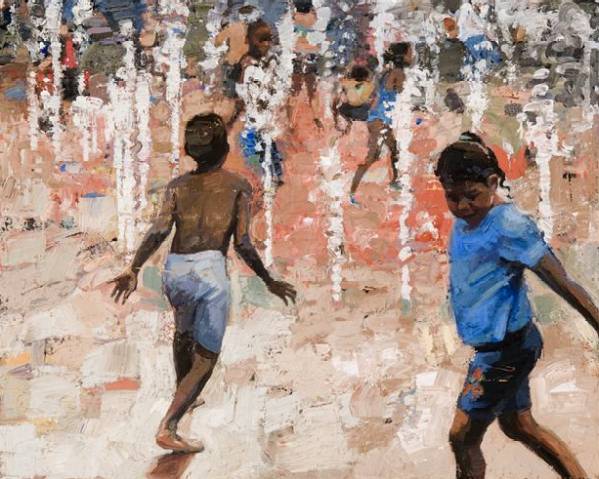 Julia Katz’s portrayal of California junior lifeguards and children at play in Atlanta’s Centennial Olympic Park accentuates the activeness of unselfconscious childhood with a vivid re-creation of their environment. Water, sand and sunlight all seem to dance with Katz’s robust, expressive brush strokes, as children in her paintings run and splash. The uniform yellow caps and red swimsuits of the junior lifeguards seem to allude to a past era, but the vivaciousness of her work provokes instantaneous enjoyment rather than the doldrums of nostalgic reflection.
The Atlanta paintings portray African-American, Latino and Caucasian children dancing in a fountain. The more urban setting allows Katz to further abstract the scenery around the kids, swirling paint to resemble droplets and streams of water streaking silver and white to reflect the natural light of the sun. A mesh of colors and brush strokes forces the background to be dynamic and become a part of the play to make the entire scene a living, fluctuating, breathing moment.

Her beach scenes are slightly more defined with shadows and horizons between sand and sea suggested by the use of color. Viewers of the paintings are still prompted to participate, to interpret the waves moving and children laughing. It is the process of taking in the textures and piecing together the scenes that makes Katz’s work so alluring and fitting for the coming summer months. (Ben Broeren)