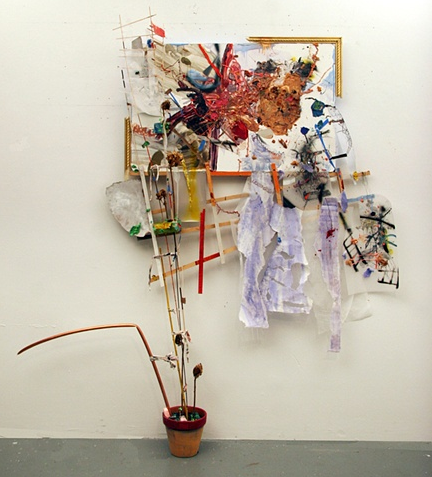 Doesn’t Artropolis sound like a futuristic Ethan Hawke movie where uniformly dressed artists and gallery owners pursue their dream of a utopia based on a foundation of aesthetic principles in an art-historical context? It’s not. Artropolis isn’t utopian or dreamy, and it isn’t over in an hour and a half, but it can be eye-numbing and interest-suppressing, just like movies with Ethan Hawke. Artropolis, like most large art fairs, feels like a celebration of quantity, more than a celebration of art. Making money is a great thing for art to do, and it is something that it must do, but the crap economy and the need to fill up two floors of the monstrous Merchandise Mart means that Art Chicago and the NEXT fair became arenas where mediocrity threatened to gobble up thoughtful stuff on a visually droning, super-sized stage.

The NEXT Art Fair, curated by the discerning Kavi Gupta, boasting the promise of a better art-tomorrow, was more substantive and inviting than the Art Chicago floor, which was polished, clean and predictable. In Gupta’s own gallery, Chicago art scene heartthrob Angel Otero’s gloopy oil smushes and silicone arrangements on canvas attracted a lot of well-earned attention. His sad flowers and drippy domestic scenery are crisp and sophisticated without being pretentious or decorative for the sake of decoration. Paintings of average living rooms with embedded video-installed Thomas Kinkade paintings hanging over the oil-rendered couches drew a diverse snickering crowd, providing more evidence that the art world’s obsession with critiquing and mocking Thomas Kinkade may never end. In the video portions of the paintings, disaster had subtly struck one of Kinkade’s idyllic towns, and ambulances were needed. In another, someone has been thrown out of their cottage and is picking their stuff up off the pastel, perfect lawn.

Downstairs at NEXT, despite the weird-for-weirdness’-sake contingent, there was a turn toward less huge, more intimate art. Even some of the largest pieces, like Dave and Jen’s bright and intricate “We told Adam we’d get over this,” a multilayered explosion which can’t be confined to the frame inspired viewers to get up close. The deep, plexiglass paintings pressed together levels of scenery and detail, and the curling stair-like arms that reached to the floor invited viewers to snuggle up.

Also at NEXT, Maximo Gonzales heeded the economic-commentary call with his dollhouse-sized scaled constructions of burning homes. The homes are scale models of actual homes that faced foreclosure, but were instead set on fire by the owners to collect the insurance money. The fiery dollhouses were accompanied by several diptychs of other houses in similar situations.

The Goffo section of NEXT was a consistent pleasure-maker. Three Walls’ thumping, groaning installation—a groan of solidarity for the exasperated and tired art consumers—provided solace for adults and their tagalongs, who took turns pressing buttons and hitting the fog-emitting, vibrating, fabric walls.

The immensity of this year’s fair was amplified by what felt like a huge drop in attendance from last year (fair organizers said it was roughly about the same). There wasn’t even a crowd around the artless women-wrestling-in-jelly pit. This feeling of emptiness, not from the visual guiltiness of failing to absorb so much artwork, but the actual emptiness provided by the space occupied by the art, was partly the result of spatial planning. Last year’s attendees complained of a crowd-crushing cattle-call feel. The result was seventy less galleries on the Art Chicago floor and NEXT dropped from 192 exhibitors to eighty-six this year. Less galleries were invited, and less were able to come. Even with more space freed up, paying attention to almost 200 gallery booths in four days is an impossible task. The overwhelmingness of the art fair experience only provided relief in the condensed salon-style exhibitions of the daring few, and the quiet smallness of some individual pieces.