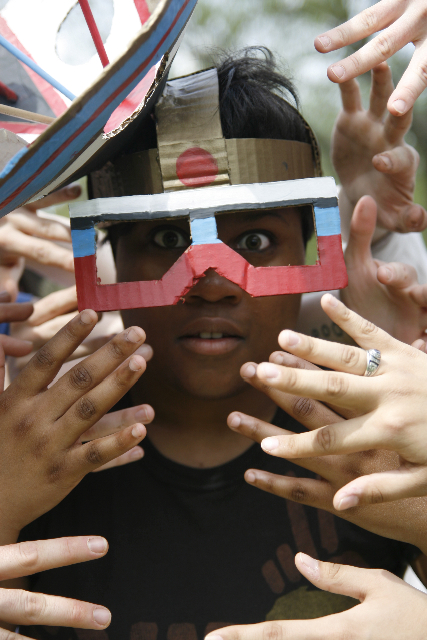 With only a week before graduation, the real world, and Sallie Mae loan officers descend, the seniors and graduate students of Columbia College will gather on Friday, May 15 for the seventh annual Manifest Urban Arts Festival. Though past festivals have boasted impressive musical headliners like OK Go and Lupe Fiasco, budget cutbacks have brought the focus of this year’s festival back to the students’ endeavors. Student artwork will be on sale throughout the festival, whose various hot spots in the South Loop Arts Corridor will be accessible via the free Chicago Trolley or by good, old-fashioned foot power.

With twelve hours of creative productions, there’s a lot to choose from at this year’s fest: Spectacle Fortuna, directed by the Incurable Theater’s Jennifer Friedrich, features a larger-than-life puppet parade of Ray Bradbury’s literary creatures, elaborately decorated and including a costume designed after the author himself. Columbia’s Interior Architecture Department promises an involved display, taking over the former Writing Center (33 East Congress Parkway) with twenty-six architectural models poetically suspended about the temporarily raw space. “Elevated Diction” will serenade elevator riders at 1104 South Wabash with poetry from the Silver Tongue reading series. “Transmission” (640 South Wabash Avenue), an exhibit of auto-inspired art, will boast ambitious projects such as a trio of life-sized, knitted “students” (bedecked in “hipster attire,” of course), a station wagon made entirely out of paper, and a forty-eight foot long pinewood demolition derby. Tap and break dancing performances will also be featured in the Transmission lot, as well as an opportunity for visitors to “confess their sins to Columbia” in a Campus Crusade car. There will also be ice cream—in case confession isn’t quite your bag. (Jaime Calder)

The Manifest Urban Arts Festival will take place Friday, May 15, 2009. Full schedules and maps are available at www2.colum.edu/manifest.