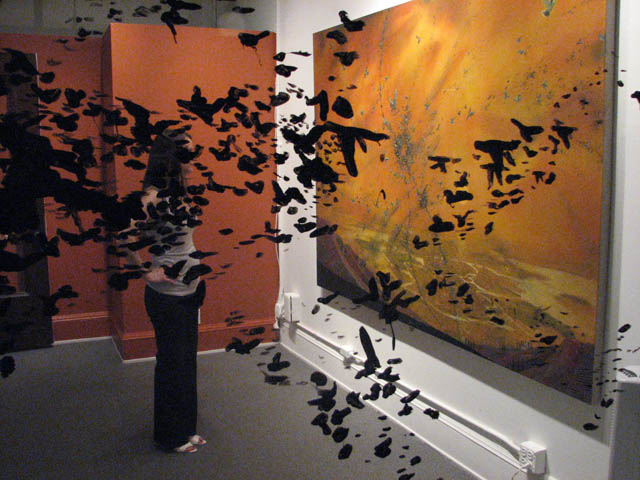 Part of a curatorial series by Finestra attempting to integrate form, content and context in its tiny space, Aaron Delehanty’s epic painting “Visible City,” and accompanying installation that further extends its expanse beyond the canvas, doesn’t so much represent a dystopian city as situate the viewer in it. From the point of view of one of the countless chaotic birds circling above a city, the eye is drawn through a number of concentric circles that lead from an agrarian hillside down to the valley of the city, as the human architecture towards the center travels forward in time to its destination, a futuristic clump of skyscrapers clouded by a dense orange fog. What makes the piece compelling and original is not its subject but its dynamism and atmosphere; perspective lines like motion lines (or stretch marks) demarcate a movement along the land that’s mirrored by the galaxy of birds above it, keeping the viewer permanently off balance. This performance quality of the “Visible City” extends to the artist’s use of Finestra’s space. Walls are painted the same choking orange as the painting’s sky, and a glass picture window is painted with black silhouettes of birds, which again create a disturbance: are the figures representations or a warning, akin to the stickers placed on a window to keep birds from smashing into them? Delehanty, whose interests include experimental map-making and soundscapes, intends “Visible City” as an introduction to a larger body of work, and the piece finally feels above all else like an uncanny prelude to a blueprint of the future. (Monica Westin)