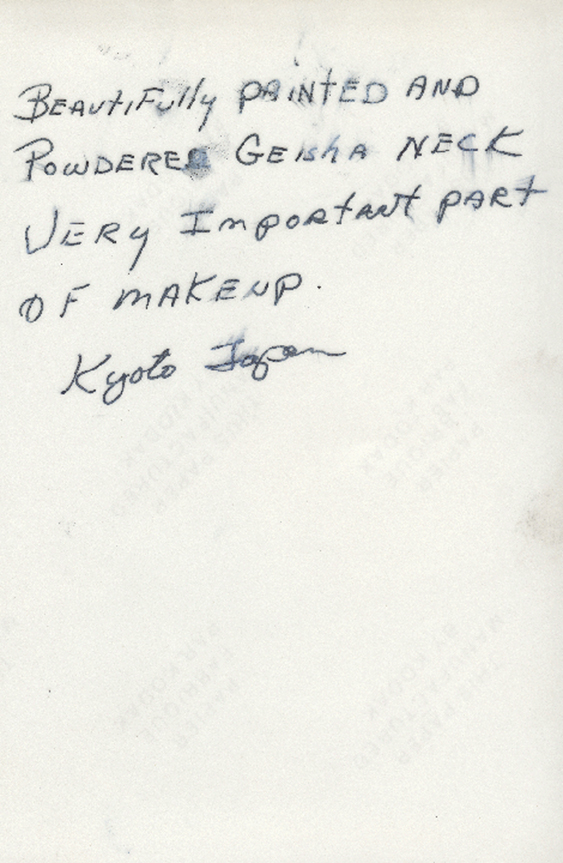 For this, her second solo exhibition at 65GRAND, Los Angeles-based artist Zoe Crosher continues her work with “The Reconsidered Archive of Michelle du Bois,” an extensive collection of photographs inherited by Crosher from du Bois, an American woman who traveled and worked as an escort in Pacific Rim cities during the 1970s-1980s. The archive itself offers incredibly rich material; du Bois photographed herself and posed for snapshots obsessively, generating a collection that features her in a dizzying variety of costumes and personas, and prompting Crosher to nickname her “the Cindy Shermanesque (but she’s the Real Thing).” Crosher’s “reconsideration” takes the form of re-photographing the fronts and backs of du Bois’ photos and exhibiting them in relative isolation from the rest of the archive. In this exhibition, the grouping Crosher has chosen portrays not the flamboyant, flashy, pornographic du Bois (visible in the comprehensive tome on view in the gallery), but, rather, the backs of things. Six of the inkjet prints included in the exhibition are photographs of the backs of photographs, each titled “This Paper Manufactured by Kodak.” The gray-printed backing of photographs, with typical tearing and peeling (as though the photo has been glued into a scrapbook, then hastily removed), is an unexpected and somewhat jarring sight when enlarged, and points to the specific physical quality—even burden—of an archive like this one. Also included in the exhibition are two images of the back of du Bois’ neck and hair, an image of a “Beautifully painted and Powdered Geisha Neck,” and a unique Polaroid snapshot of du Bois with a man (whose face has been effectually erased by Crosher with Sharpie), titled “One of the Only Images From The Archive With Her Eyes Closed.” The overall effect of this particular selection is subtle, subdued, and melancholy, suggesting that meaning lingers precisely in those places we overlook, or look away from, or shut our eyes against. (Kathryn Scanlan)