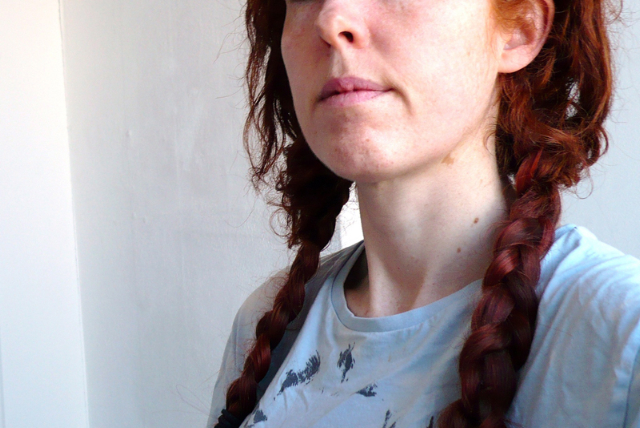 Currently on view at Julius Caesar—the artist-run space housed in one of the West Carroll Avenue studio buildings—is Deirdre O’Dwyer’s “Stranger,” an exhibition of ten small paintings with an accompanying floor stack of free-for-the-taking burned CDs. Nine of the paintings hang together on one wall and one painting hangs near the corner of the adjacent wall, as though the person doing the hanging had intended for all to be grouped together, but had miscalculated and run out of room. Several of the nine paintings hang slightly askew and lean against the others, reinforcing this sense of casual, messy haste, but also suggesting a kind of intimacy, as though the line of paintings have somehow linked arms with one another. These paintings are very much about surface; each work rewards the attentive viewer with a sense of deliberation and process, a tangible feeling of tediously wrought color and texture. Embedded within the smeared white surface of one painting are tangles of curly red hair, ostensibly that of the artist’s, whose image (from the nose down to about collarbone) appears on a card tacked up outside the gallery door, her red hair hanging in two braids. Bringing the freebie CD (unmarked, save for a red X) home and slipping it into the disc drive revealed it to be a burned copy of Willie Nelson’s 1975 concept album “Red Headed Stranger,” a rambling linked narrative about a brokenhearted outlaw that plays with the slippery divide between autobiography and fiction in storytelling. Standing at the entrance to the gallery, looking from the photo-card to the paintings and back again, one begins to see a resemblance—not anything distinctly or overtly recognizable, but a subtle similarity of hue and texture—suggesting that the paintings as a group are a kind of abstract self-portrait. Like Nelson, O’Dwyer seems to understand the elusive nature of portraying the self—that multifarious and perpetual stranger. (Kathryn Scanlan)