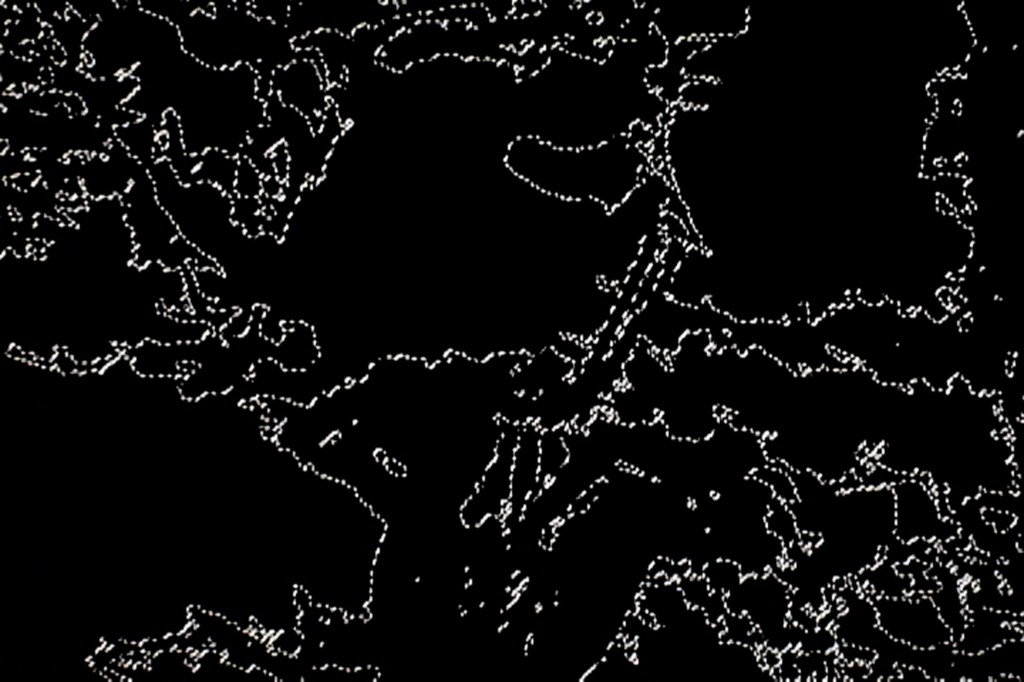 Josh Azzarella’s solo show at Lisa Boyle Gallery in 2006 featured a photo of a Chinese democracy activist in the street facing an empty space where we expect a tank, another of an Abu-Ghraib guard standing in front of a box on which stood no masked prisoner, and a video of a jet flying past the World Trade Center without incident. Any photographed scene suggests a crime, as Walter Benjamin proposed, even without evidence. I admire Azzarella’s directness, but like The Onion, and other mockumentary reportage of the Jon Stewart era, there is a risk of blunting emotional force when one triumphantly presents the emperor’s garments as just so many artfully placed pixels. As Honore Daumier complained, “Photography imitates everything and expresses nothing. It is blind to the world of spirit.”

Jesse McLean addresses photojournalistic deception differently. In her show “Invisible Tracks,” now on view at Three Walls, six inkjet prints depict diving and swimming Caucasian men afloat in the white-and-gray checkered void that Adobe Photoshop users recognize as a transparent layer, ready to be transposed onto any chosen environment. Context is provided by the video “Clone” on the adjacent wall, in which the virtual eye pans and zooms around a scene of a pool in a ruined Iraqi courtyard, stealthily being altered by the Photoshop “clone tool,” a highly useful retouching feature that allows a small area of color and texture to be repeated anywhere in the image.

McLean’s video ”Magic Wand,” in the darkened half of the gallery, is a flickering barrage of still fragments from war photography on a black screen, which, in a mesmerizing and sickening loop, calls to mind the “shock and awe” menace of a nighttime invasion. With only occasional interruptions, viewers of “Marching Ants” stare at a nearly still black screen broken into organic shapes formed in the flickering marquee lines that designate areas of an image selected for alteration. Eschewing the closure of shrill posturing or smug satire, McLean’s work uses chopped-up images of Iraq to confront the problematic allure of a post-colonial landscape onto which we still project ourselves. (Bert Stabler)