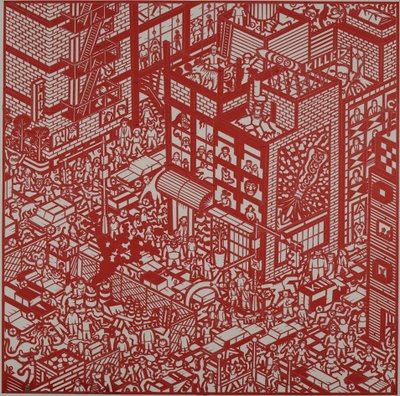 The “(Un)Real City” group show at Kasia Kay Art Projects, curated by Stefania Carrozzino, has all the problems that come when you group a wide variety of work by a vague yet overworked theme (in this case, the explicit concern is with the ecology of the new urban condition, the global metropolis, and our new relationship to space through cyberspace). The work has a unsurprisingly vast range in terms of theme and capacity, containing some truly banal layered digital images of cityscapes and other variations of collage that attempt to express the complexity of our relationship to the world but are just as mediocre as the interfaces they invoke. Most pieces simply don’t seem to fit together, so that a gorgeous photograph by David A. Parker of some dislocated circles floating above a field almost gets completely lost in the grouping.

There are, however, two stunning works that absolutely make the show worth a visit. The first, “Dream City No. 1” by the self-taught Chinese artist Qin Fengling, contains a staggering number of tiny, three-dimensional, acrylic human figures that are arranged and spaced to form a city skyline just as though they were pixels on a screen, in a clever reversal of the digital and material. Claudio Oronato makes use of another kind of imaginary space that’s both performative and visual in his paper cutout “Assissinio di un Sindiacalista Colombiano a Brooklyn,” invoking the process of Chinese paper cuts and the way they manipulate and lacerate a flat surface to create space, as much as the intricate city he thus represents. If all the works were so provocative in their unpacking of the physicality of media and our social theater, this would truly be a progressive show, which would have been doubly impressive given the somehow already-dated nature of its overarching subject matter. (Monica Westin)