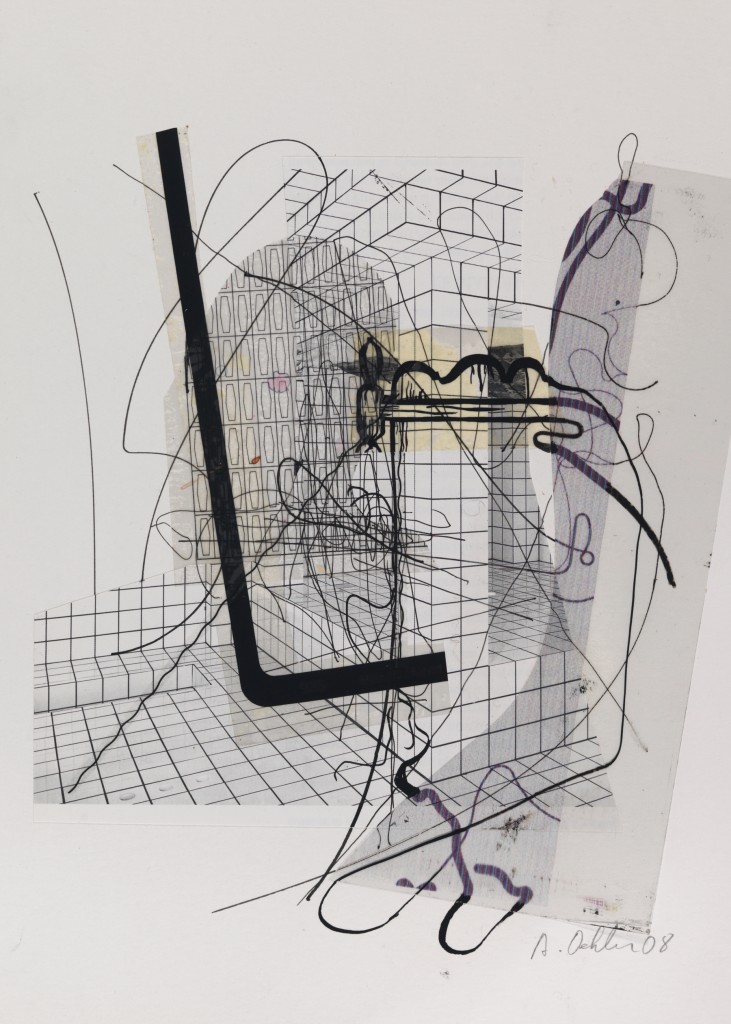 The title of Albert Oehlen’s show at Corbett vs. Dempsey, “A Vanguard With Decorum,” evokes the complicated specter of jazz, a connotation that is reinforced in the catalog essay by gallery co-owner and accomplished musician John Corbett. Indeed, every piece in the show reinforces that association. Oehlen’s monochromatic collages, with their jaunty tangles of parallel lines and calligraphic clef-like flourishes so clearly depict a hard-swung musical score that I could imagine them as a retrospective of Art Blakey album covers designed by Stuart Davis. Their high-energy design is unimpeachable, and it’s great to see a contemporary master like Oehlen showing in such a deserving small space in Chicago.

Since the analogy is there, though, I would say that the historical arc of jazz might be justly if crudely applied to the work of Albert Oehlen. His abstractions and photomontages made him perhaps the most formally gifted neo-Expressionist of the 1980s; Katie Kitamura noted his “grafting of speed and slowness on to a single canvas.”  In his collaboration with Martin Kippenberger, he helped to create some of the first and best “conceptual lite” artwork—clever pieces that were challenging, thoughtful, and entertaining. In a vaguely similar way, musicians like Sidney Bechet and Jelly Roll Morton created music that borrowed from old ideas, but twisted them into new life forms that reflected a new society. Now, however, we have the processed sludge of “smooth jazz” and, more analogous to Oehlen, we have the Marsalis brothers touring concert halls and touting “jazz education.” There is elegance and virtuosity, but there is also a distant complacency that undermines the urgency of the art.

Now, I would rather see any Albert Oehlen show, this one included, than listen to a Wynton Marsalis disc. But there are many things worse than Wynton Marsalis, and there is no excuse for missing this exhibit. Just don’t expect artwork that spills beyond the edges, with color and layering that derange your sense of visual depth and inanimate time, as in the Oehlen of old. Prepare instead to be soothed, and solidly impressed. (Bert Stabler)