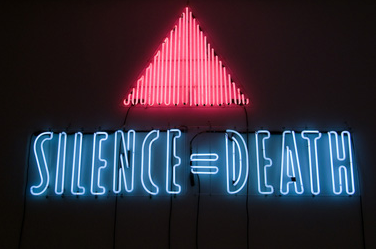 “There is no such thing as silence. Something is always happening that makes sound.” This quote from John Cage functions as a starting point and thesis for “Several Silences”; its message can be sensed soon after entering the large, open space of the gallery, which becomes an echo chamber for the steps and mutterings of viewers and the various sound pieces included in the exhibition. I became aware of Gran Fury’s “Silence=Death” neon sign—installed very high on a center wall—because of its sound, the distinctive fizzling of lit neon tubes. Cage’s influence—or, particularly, the influence of his seminal composition 4’33”, which features a pianist sitting at a piano reading a blank score for four minutes and thirty-three seconds—is prevalent throughout the exhibition, particularly in the contributions of Carl Michael von Hausswolff (whose misinterpretation of 4’33” as a measurement results in an 81” spiral etched upon an unplayable vinyl record) and Jonty Semper, who recorded the minute of silence observed in London after the death of Princess Diana. The latter recording, like Cage’s 4’33”, reveals the impossibility of absolute silence in a world full of living beings; Semper’s soundtrack brims with the white noise of wind and distant traffic, as well as the eerie, distended cries of birds and babies. Some of the two-dimensional works included in the exhibition, necessarily mute, nonetheless evoke the starkness and restraint inherent in the denial of language and communication. Troy Brauntuch’s “Untitled (Shirts #1 and #3)” reveal themselves, upon close inspection, to be very lightly rendered drawings of men’s dress shirts stacked on shelves, but from a distance, gray and ghostlike, they could stand in for any material heaped in a grid, serving as a grim reminder of the surfeit of objects in our world, and their promise to outlive—nay, bury us. Similarly evocative are Harold Mendez’s pair of white announcement boards, gleaned from a university campus and picked clean, so that only staples and pinholes give testament to the flurry of communication that once took place. The titles of these pieces, however (“Better Off Than When Life Was Babble” and “Nothing Prevents Anything,” both taken from Samuel Beckett), come close to spoiling the spare elegance of the work, an issue that clouds the exhibition as a whole. The heavy influence of the show’s title and theme begins to feel oppressive after awhile, as though the works, unable to speak for themselves, require the guiding hand of a ventriloquist. The power of most of these pieces comes not from being collected together under this curatorial umbrella, but from the credit they grant the viewer, that essential space for thought and wonder, where silence speaks volumes. (Kathryn Scanlan)

Through June 7 at the Renaissance Society, at the University of Chicago