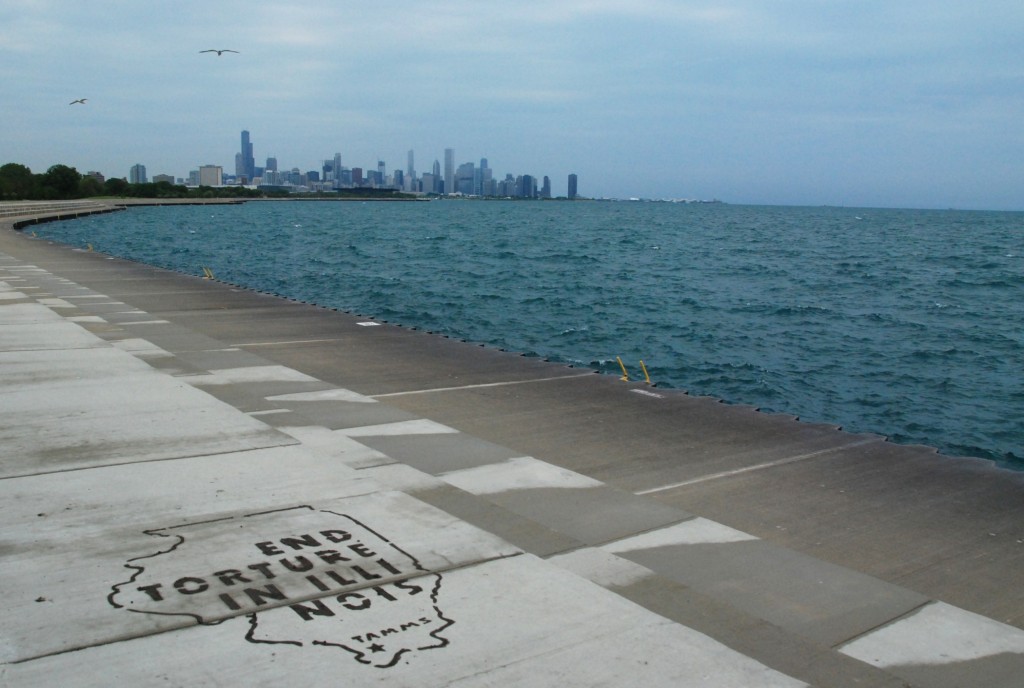 Dirt, water, whisk, sponge, bucket, box cutter, tar paper—these are not your typical artist’s materials. Mix the water and dirt in the bucket, lay the cut-out paper against a cement surface, and sponge on the mud, however, and the result is a handsome work of environmentally friendly graffiti.

Street artists often work with stencils, using them to shape spray-painted statements. But a chemical medium dispensed through an aerosol container reeks of toxicity, so Milwaukee-based Jesse Graves, intent on finding a more compatible way to apply his environmentally and politically conscious messages, evolved an alternate means of tagging: mud. The technique is nothing short of ingenious. Simple, cheap, graphically effective and not necessarily illegal, mud stencils, if protected from the elements, can last up to ten years; or, like all dirt, they can be washed off with water. Consistency is key, however, to achieving a bold visual with sharp edges: the mud mixture must be carefully controlled so that it achieves a viscosity akin to peanut butter or feces.

Yes, feces—like the feces sometimes smeared by inmates at Tamms prison on the walls of their cells. Cells where they are held in permanent solitary confinement, bereft of all human contact, for up to twenty-three hours a day, with breaks only for showers and individual exercise. It’s a supermax jail in Southern Illinois originally designed for the short-term punishment of violent inmates from other facilities, but one-third of whose occupants have now been locked up in extreme isolation for over a decade, with no clearly defined standards for transfer in or out. Widely believed to cause permanent physiological and psychological damage, these conditions contravene the Geneva Convention, two United Nations treaties and various other international human-rights accords. Conditions which have led inmates not only to paint their walls with shit in desperate attempts for attention, but also to mutilate themselves, to attempt suicide, and to require—for one in every ten men at Tamms—regular doses of psychotropic medication. All this for up to $90,000 a year per inmate, three to four times the cost of incarceration at other prisons in Illinois. 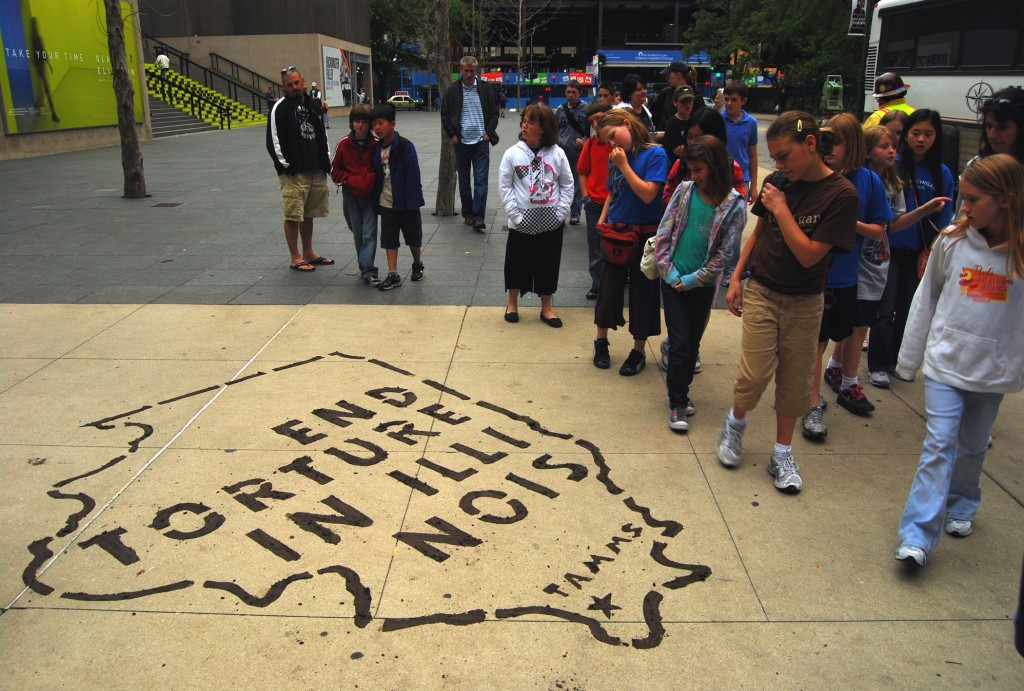 What any of this has to do with mud stenciling was revealed this past Saturday as some thirty artists and other activists took to the streets of Chicago armed with six-by-nine-foot cutouts, informational flyers and the resolve to help end torture in Illinois. That was the message they broadcast in mud—END TORTURE IN ILLINOIS—bordered with a broken line in the shape of the state, topped with a star for Tamms, the regional capital of cruel and unusual punishment. They hit locations across the city, from the Art Institute and the Board of Trade to the Logan Square Skate Park, Senator Rickey Hendon’s West Side office, the Lincoln Park Green City Market, the University of Illinois quad, the DePaul Student Center and various sidewalks, boarded-up buildings and underpasses in between.

The campaign was the latest tactical art action by Tamms Year Ten, and one of its most vivid and accessible yet. A coalition of more than seventy groups throughout Illinois, from mental-health alliances to human-rights advocacies and faith-based committees, Tamms Year Ten was founded last year on the occasion of the prison’s tenth anniversary with the goal of urging the governor of Illinois and the Illinois Department of Corrections to either close or convert the prison, following national trends; to establish transparency and standards at the facility; and at the very least to follow the original legislative intent for the supermax, which was only meant for short-term use.

Tamms Year Ten has also worked with Illinois lawmakers to introduce HB2633, which includes provisions for instituting accountability at the prison and prohibiting mentally ill prisoners from being moved there in the first place. The bill, sponsored by Rep. Julie Hamos with twenty-seven co-sponsors, seems like the least the state can do in the face of the grotesque human-rights violations it has been committing for the past decade in the name of law and order. Identical confinement at Guantanamo Bay, whose closure has been ordered by President Obama, has been determined by the Pentagon to be too isolating for prisoner safety. But, according to an editorial that appeared in the Tribune just a few weeks ago, it’s good enough for Illinois residents. Chicago’s newspaper of record fears that the situation at other prisons could get uglier if the IDOC loses its freedom to keep inmates locked up at Tamms indefinitely, despite studies that indicate supermax incarceration increases recidivism and that Tamms has done nothing to reduce violence in other state prisons. Never mind the international consensus that prolonged isolation equals torture—as the Tribune put it, the “worst of the worst” end up there. Read: who cares.

Who cares, indeed? With bold public rallies, calls to lawmakers, intelligent press, ever more studies and reports, meetings with legislators and IDOC officials, and some smart art activism, hopefully a whole lot more people. Mud washes off in the rain—years of being cut off from any social contact, being locked up and treated worse than any animal, doesn’t.

Thanks Lori, but I want to add one thing: The stenciling makes public what some want to keep secret, and makes visible what some want to keep invisible. Tamms, like Gitmo, Bagram in Afghanistan, Abu Ghraib (until recently), and other locations, is a “black site”, a hidden place where the state can maintain the illusion that it is a government of reason, law, and logic. In fact, when it comes to a certain group of criminals and putative terrorists, it is a government of irrationality, illegality, and madness. The stencils — if widely enough placed and seen — will provide… Read more »

[…] to dry on the streets. Many cultural and political commentators discussed the action, including a piece written by Lori Waxman for Newcity Art. T.A.M.M.S. (TAMMS) Mudd Stencil Documentation, in front of […]

[…] to dry on the streets. Many cultural and political commentators discussed the action, including a piece written by Lori Waxman for Newcity […]

[…] extends into advocacy, political research and activism. For eight years, she has been producing projects that focused on the now closed Tamms Correctional Center, the supermax prison in southern Illinois […]