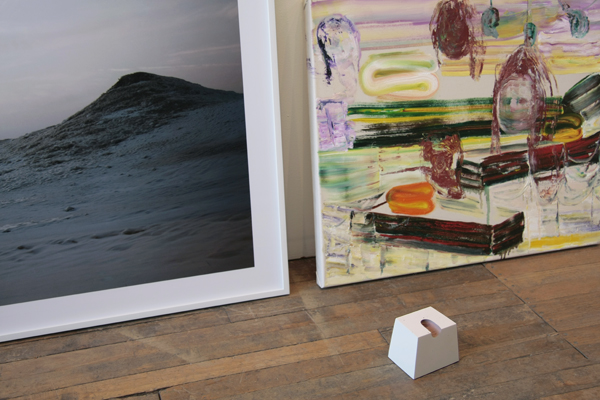 The “Artists Run Chicago” showcase, which opened at the Hyde Park Art Center last month, shed a reifying light upon a phenomena that nearly all parties involved in the Chicago art world consider second nature—the artist-run space. What the “Artists Run” show at HPAC manages to convey is the immense and varying breadth of sophistication, from the spotlessly clean, to the hopelessly beer-soaked, which such spaces collectively display. Dan Devening’s studio-turned-exhibition space represents the most pristine commercial-like end of the artist-run spectrum. Likewise, Devening lays claim to an attractive reservoir of talent. Recently, he turned over the reins, and responsibilities, of his role as curator (not to mention his last remaining morsel of personal studio space) to gallery assistant Thomas Roach and recent SAIC graduate Xavier Jimenez, who have put together an impressive conglomeration of work from the Devening database.

With striking success, Roach, with his razor-sharp perception of the subtlest formal details, unites a collection of work otherwise quite difficult to amalgamate. Beginning with the smallest piece, a two-part sculpture titled “Double Reliquary” (2008) by Nathanial Robinson, and working outwards, Roach establishes a chain of formal decision-making linking the group together. From floor to wall, attention shifts upwards to “tipi, log cabin” (2009), a large-scale photocopy-printed photograph by Nicholas Gottlund of two embedded makeshift log structures standing alone upon a meadow. Gottlund’s use of various supposedly undistinguished or unrefined methods of output and presentation flirts with a type of honesty or full disclosure echoed in a nearby pairing of Rainer Spangl’s petite color pencil drawing, “Untitled” (2008), and Jin Lee’s assuming color photograph, “Wave 1” (2008). Rather than hung at center, the two pieces sit comfortably along a shared foundation, a curatorial acknowledgement that, rather than attempting to force an artificial notion of equality between respective works of varying scale and descriptive precision, the works are and will remain inherently unequal, neither a detraction nor an elevation of one in relation to the other, and an example of the kind of finesse required to succeed in even the trickiest curatorial situations. (Nate Lee)