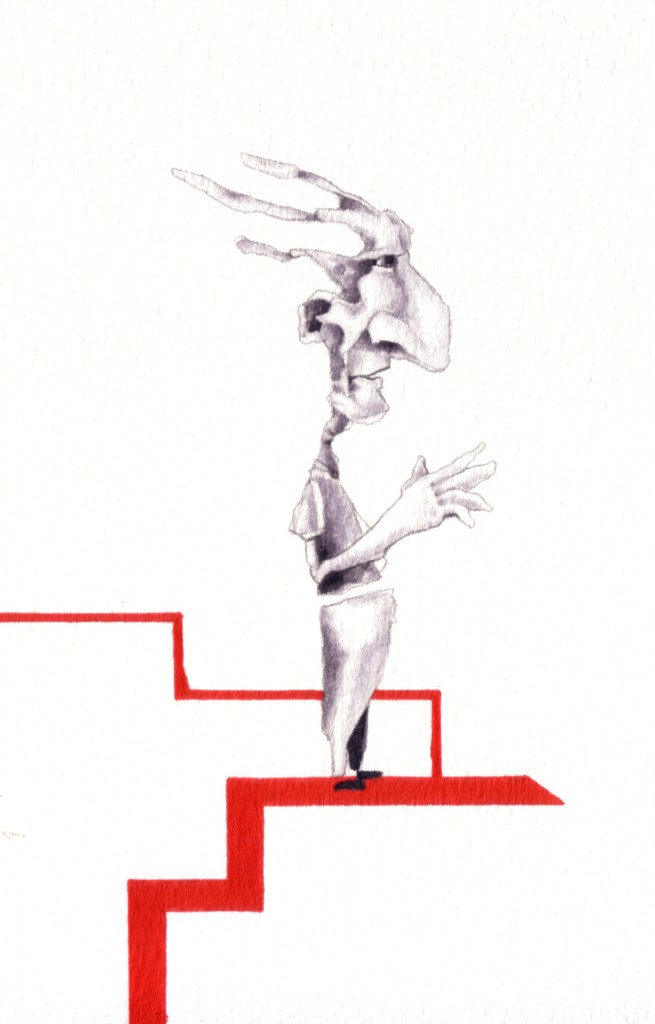 I’ve spent more time than I’d like to admit wondering what you were thinking as you walked the halls of the smART Show in the Flat Iron last Friday, between 10:30pm and midnight. I’m curious because in that time, you managed to swipe one of my drawings right off the wall and abscond with it.

My initial reaction, not surprisingly, was anger. Intense, red piping-hot anger. “What the fuck!?” were my words, to be exact, extra emphasis on the “f.” Who steals art at a small neighborhood show? From an “emerging” artist? (“Emerging” = “starving”) Even more, who steals a piece of art that’s already been sold? Now I know it was small, and as you passed by, maybe you thought it would fit perfectly in your bag or pocket or whatever, but did you not see the sticker above the drawing that said “sold?” Could you not have chosen a piece that hadn’t already been paid for? Because you see, some artists who do shows in the Flat Iron, especially in the halls of the Flat Iron, are struggling; they’re artists who are desperately trying to carve out some tiny, peaceful existence. We’re trying to do something good, to make and share something outside the ever-present web of invasive consumerist insanity. I get (but don’t condone) stealing an iPhone, an X-Box, cash; but a drawing? Not only did you steal something I made, but you took money out of my pocket. So: what the fuck!?

Really, what were you thinking? Was it, “this’ll look awesome on my bathroom wall?” Was it the thrill of stealing something? Are you some kind of Vincenzo Peruggia? What’s next, a Steven Soderbergh art-heist caper? Admittedly, I had to work hard to keep it from ruining my weekend. I decided the best way to fight it would be to turn the whole thing into a comedy, so as to diffuse my anger. Later, around three in the morning, I made a “wanted” poster, a framed print of the missing art offering a reward for any information that would bring the “international art thieves” to justice. In short, I had to turn you into a joke in order to not lose faith. And it worked. Your theft of my drawing and the subsequent art I made of that theft led to good conversations about where we are as a society, it led to some laughter, some congratulations, even. (Because after all, you must have really loved it, right, to break the law?)

And what are you thinking now, after some time has passed? If you still have the drawing you stole from me, is it on your wall? Do you look at it? Enjoy it? Is it a trophy of how you stuck it to some guy showing his work in a damn hallway? Well, kudos, pal.

Now I want to offer you an opportunity. I want to invite you to my next show, which is soon. I want you to come and talk to me. You don’t have to tell me that you’re the guilty one and you don’t have to bring my drawing back, assuming you still have it. You just have to come and talk to me. Have a conversation with me and look in my eyes, then decide if I’m someone you want to steal from. Decide if I’m the kind of person you want to blatantly disregard and disrespect. Shake my hand.

I’ll leave you with this: If you still do, in fact, have the drawing you stole from me, I want you to gently slide the back out of the frame. There’s probably a piece of cardboard that you’ll need to also pull out before you get to the back of the paper the drawing is on, but once you get to that piece of paper, take a look at it. I always write something on the backs of my drawings, little private random spontaneous messages from me to you, whoever the “you” happens to be.  Read it to yourself and think about it. Then come and see me.

One time, in my younger years of playing in bands, someone stole an entire stack of stickers from our merch table. I thought, “What the hell is a person gonna do with 200 copies of the same sticker?” While I was amused by the idea of some stranger completely covering his or her car with the stolen property, I couldn’t help but be pissed. I’m still pissed, and this was like ten years ago.

But this is an atrocity. A piece of art? What has become of this world?

Thanks for your commiseration, Tom. i’ll let you know if the culprit turns up at a future show. And i’ll keep my eyes open for your stickers!

Hey Art Thief, Damien’s next show is @ Vegan Gallery on Saturday, June 20th, 7-11pm exhibiting many more pieces definitely worth stealing, but I’m not giving you the address!

Damien,sorry to hear about that. There ARE CAMERAS in the Flat Iron Building that Im sure you can access video because I have done so in the past when something was stolen. Contact me & I’ll give you the info.

Billgrab, thanks for the offer. Here’s my email: notjackkerouac@yahoo.com
(Probably not the smartest thing to put out there, but what the hell?)

Could the culprit have been drunk? Many people (myself included) do really rash senseless things, which they otherwise would not, while drunk. It just seems to be the most likely explanation and it excludes the culprit from any rational motive, which may be an easier notion to live with. Here’s a simple material solution, which may help prevent such occurrences in the future: http://www.idealtruevalue.com/servlet/the-68048/Detail Affix the top hole to the back of your piece at the bottom of the frame. After hanging the piece sink a screw, threw the bottom hole, into the wall. Paint the bottom portion of the… Read more »

Drunk is, in fact, a likely explanation, but a shitty excuse. (And let’s be honest: First-Friday’s at the Flat Iron, coinciding with the smART Show, around midnight, is pretty much a recipe for at least drunkenness. Two other artists were stolen from as well, however, both in the same corridor as me. It could’ve simply been an intoxicated shopping spree, but that doesn’t necessarily make it any easier to stomach.)

Reply
Rant of the Week: Damien James at Newcity : Bad at Sports