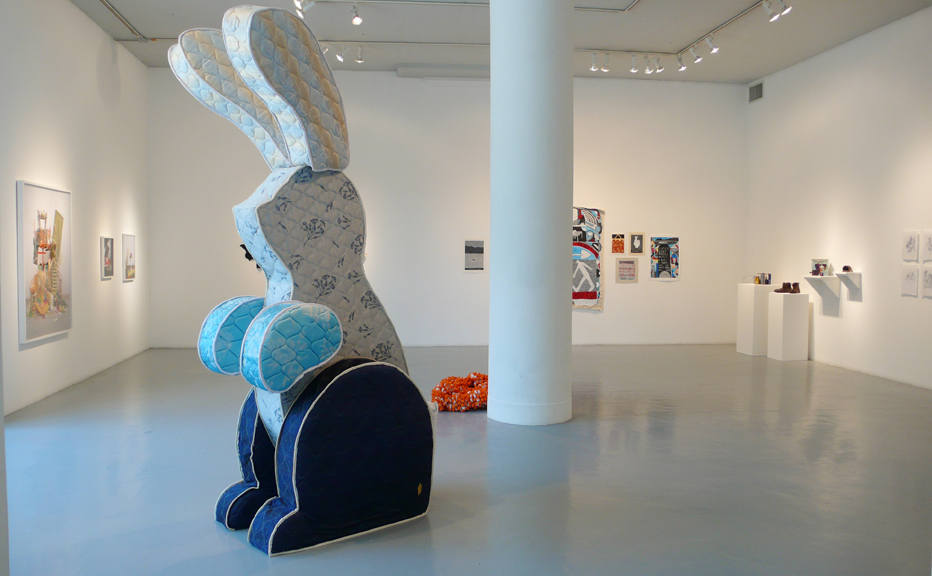 Disaster, whether natural or human-made, is at the heart of the large group exhibition “Second Stories.” Curators Brian Gillham and Rachel Kalom bring together artists working in a variety of media that generally reflect America’s newfound frugality, hence oil on canvas takes a backseat to work made from materials such as cardboard, packing tape and found objects. Taking satirical aim at luxuries and commodities (including art), Vijay Paniker’s ceramics update wine and cheese parties for the current recession: a tube of easy cheese and a box of wine. We’re not giving up these luxuries; we’re just giving up good taste. Deb Sokolow’s work panders to fear-mongering. Her “CIA Failed Assassination Attempt #3” recounts one of the CIA’s unsuccessful attempts at assassinating Fidel Castro by paying $150,000 to an agent of the Mob to arrange the hit. She humorously concludes, “The CIA should’ve gotten their money back on this one.” Sokolow combines obvious cover-ups, effacing and slightly menacing dark shapes to convey both what we don’t know and the little we do about what the CIA exactly does or has done. Though some of the work on view in “Second Stories” is passable, the art brought together reflects our current uncertainty, but as Paniker indicates, we’re not really that worried. (Abraham Ritchie)