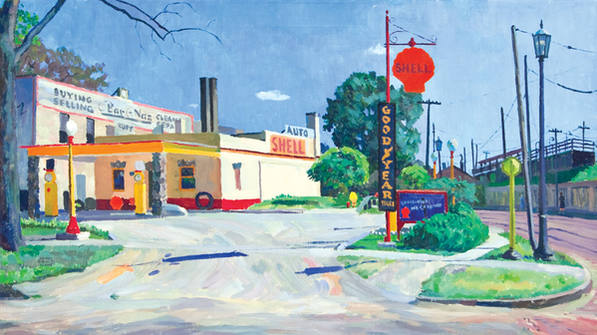 A city looks different to those who walk instead of drive its streets. There are so many stretches of crumbling concrete that demand attention if only because it takes so long to walk through them. And it was the loneliest, most dreary sections of parking lots, underpasses, gas stations and El platforms that were the most attractive to Walter Burt Adams (1903-1990), the cantankerous urban landscapist of Evanston, Illinois. Plein-air painting is still a popular practice for both amateurs and professionals, but Adams had the benefit of an Art Institute education that was, back then, more rigorous about formal and technical issues than conceptual ones. And he received a kind of institutional recognition that is not available to any Chicago artist today: regular inclusion in the annual “Chicago and Vicinity” show (discontinued twenty-five years ago)—which he probably wouldn’t get today, anyway, because his paintings pursue that most ordinary of themes: the love of sunny days spent in one’s hometown. And a love of painting, concerning which he wrote that least available (and most collectible) tome, “Infinite dynamics: the Golden Key to art:  book about composition and art, containing some ageless secrets of great art” (published 1950). Might “infinite dynamics” be considered an ageless secret of great art? Perhaps—but it has nothing to do with the art world that came after him. You can certainly feel it in his work, though, just as that earlier urban eccentric, Johannes Vermeer (“The Little Street”) could make the ordinary, patchy surfaces of his hometown feel full of hope and infinite promise instead of despair and neglect. (Chris Miller)